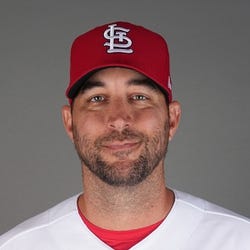 2022 Stats
W-L
11-12
ERA
3.71
WHIP
1.28
K
143
SV
0
2023 Projections
W-L
ERA
WHIP
K
SV
Unlock Our Projections
2023 Fantasy Outlook
It was widely assumed Wainwright would join fellow Cardinals legends Albert Pujols and Yadier Molina in retirement, but the right-hander instead opted to return for an eighteenth and final season. Wainwright delivered another strong season in 2022 with a 3.71 ERA, 1.28 WHIP and 143:54 K:BB across 191.2 innings. His average fastball velocity dropped below 89 mph for the first time in his big-league career, and the 17.8 percent strikeout rate also dropped more than three percentage points from the previous campaign. Wainwright has figured out how to pitch effectively despite the impact of father time, though his reduced strikeout rate limits his fantasy appeal. The departure of Molina could have some effect, especially depending on who takes over behind the plate, and there's always inherent risk when it comes to a 41-year-old pitcher. Read Past Outlooks
read more
RANKS
#