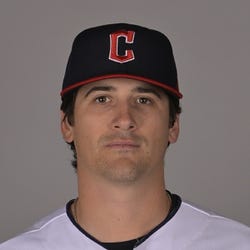 2022 Stats
W-L
14-5
ERA
3.49
WHIP
1.24
K
120
SV
0
Rest-of-Season Projections
W-L
ERA
WHIP
K
SV
Unlock Our Projections
2022 Fantasy Outlook
Quantrill recorded a 2.03 ERA and 1.31 WHIP, fanning 20 in 26.2 innings over 17 relief appearances before transitioning to the rotation. After getting stretched out for a few outings, Quantrill posted a 2.81 ERA and 1.13 WHIP with 89 punchouts over his final 112 innings, spanning 19 starts. A lucky .267 BABIP and 80% LOB mark aided Quantrill as his ERA estimators all pegged his actual to be over a run higher. He's not dominant with a 19.6 K%, but Cleveland has a knack for getting the most from their hurlers and Quantrill does throw a slider and changeup with double-digit SwStrk percentages, so maybe they can work their magic again. Quantrill should break camp in the Guardians' rotation but beware of paying for 2021's success. There is upside with more strikeouts. Chasing it is risky. Read Past Outlooks
read more
RANKSFrom Preseason
#271
ADP
#

* Exit Velocity, Barrels/BBE %, Balls Hit 95+ MPH %, and Spin Rate are benchmarked against 2019 data (min 120 IP). See here for more exit velocity/barrels stats plus an explanation of current limitations with that data set.
K/BB
2.55
K/9
6.2
BB/9
2.4
HR/9
1.1
Fastball
93.6 mph
ERA
3.49
WHIP
1.24
BABIP
.286
GB/FB
1.23
Left On Base
75.3%
Exit Velocity
81.8 mph
Barrels/BBE
5.2%
Spin Rate
2079 rpm
Balls Hit 95+ MPH
22.5%
Swinging Strike
8.4%
Prospect Rankings History
View Complete Cal Quantrill Prospect Ranking History
Advanced Pitching Stats
Loading Advanced Pitching Stats...
Defensive Stats
Loading MLB Defensive Stats...
Stats Vs Today's Lineup
Want more matchup stats?
View Cal Quantrill vs. Batter Stats
Loading Matchup Stats...
Guardians Depth Chart
Our full team depth charts are reserved for RotoWire subscribers.
Subscribe Now
Recent RotoWire Articles Featuring Cal Quantrill
Weekly Pitcher Rankings: And Then There Was One
2 days ago
2 days ago
Robbie Ray tops Todd Zola's weekly pitcher rankings thanks to a pair of home matchups against a pair of struggling opponents.
DraftKings MLB: Saturday Breakdown
2 days ago
2 days ago
Framber Valdez has been excellent all season and Chris Morgan doesn't see that form dipping against the Orioles.
Yahoo DFS Baseball: Saturday Picks
2 days ago
2 days ago
Chris Morgan doesn't have much confidence in Chad Kuhl at Coors Field and has selected a few Padres to take advantage of the altitude.
Weekly Pitcher Rankings: Cease Tops a Busy Week
9 days ago
9 days ago
Two-start pitchers fill eight of the top nine spots in Todd Zola's weekly pitcher rankings, but Jacob deGrom earns a spot near the top despite being scheduled for just one start.
Todd's Takes: Popping Out and Popping Off
16 days ago
16 days ago
Todd Zola discusses foul territory and the new MLB rules before picking out the most fantasy-relevant bits of info from Friday's MLB slate.
Past Fantasy Outlooks
2021
2020
2018
2017
Cleveland has had the touch lately when it comes to starting pitchers, and Quantrill is a sneaky candidate to be next to break out after he was acquired from San Diego in the Mike Clevinger deal. Small sample warning: in eight appearances (14.2 innings) after the trade, Quantrill had a 1.84 ERA and 1.09 WHIP. He relied primarily on his 95-mph sinker and 86-mph slider. His changeup usage declined significantly year over year, though the changeup was more effective with less frequent usage. Quantrill does not get as many groundballs as you might expect with that repertoire (career 43.7 GB%), but he may have found the sweet spot in terms of pitch mix and the improved control down the stretch was particularly encouraging (3.3 BB% with Cleveland). There will be starts available and Quantrill will be at the top of the list to step into the rotation if he isn't there right away on Opening Day.
Quantrill's rookie season was a mixed bag. Just four of his 18 starts were of the quality variety, but he was pitching quite well for a stretch until he tired late in the season. He had a four-start stretch from Aug. 27 to Sept. 15 in which he allowed 28 earned runs in 16.2 innings, taking his ERA from a strong 3.32 to an ugly 5.33 ERA. The Padres allowed him one more start before shutting him down for the season, and he finished with a 5.16 ERA. He simply ran into a buzzsaw there with starts against the Dodgers, Diamondbacks, Cubs and at Coors Field which ruined what had been a solid statistical rookie season. His limited strikeout production is tough to roster in shallow mixed leagues, but the young man has a solid skills base to be a productive pitcher moving forward and is better than what his ERA showed last year. He will compete for a rotation spot in camp, but will likely open the year at Triple-A.
Quantrill's stock may have peaked prior to the 2017 season, when many evaluators projected a future No. 3 starter with a chance to be a No. 2. One can still dream on a potentially plus-plus changeup and a borderline plus fastball, but he was too inconsistent with his mechanics and command last year to flash upper-rotation upside very often. An athletic 6-foot-2 righty, Quantrill underwent Tommy John surgery in 2015, which is why he is heading into his age-23 season with less than 50 innings under his belt at Double-A. If his command were to jump a grade and he added a tick to his fastball, we could still comfortably project a No. 3 starter, but given his age and proximity to the majors, it seems safer to expect a No. 4 starter at this point. There may be outlets that are slower to adjust to this new reality, so he could still fetch a top-100 prospect this offseason. He could make his big-league debut in the second half.
After undergoing Tommy John surgery in March 2015, Quantrill fell out of the mix for last year's No. 1 overall pick. The Padres used the situation to their advantage and landed him with a slightly over-slot deal at No. 8. The early returns suggest they got the best college arm in the draft. He has a deadly changeup, but unlike most minor leaguers with plus changeups, his fastball sits in the mid-90s, serving as a second plus pitch. His slider is good enough for him to safely project as a mid-rotation starter, but if it were to jump a grade in the coming years, Quantrill would have the repertoire of a No. 2 starter. It will take him a couple of years to build up his innings to the point that he eases workload concerns, but he has a starter's frame, so his body should hold up. Despite barely getting any work at Low-A Tri-City or Fort Wayne last year, he is advanced enough to get an assignment to High-A Lake Elsinore this year, joining one of the best rotations in the minors.
More Fantasy News