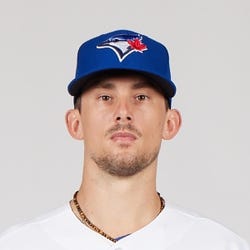 2022 Stats
AVG
.202
HR
6
RBI
24
R
43
SB
2
Rest-of-Season Projections
AVG
HR
RBI
R
SB
Unlock Our Projections
2022 Fantasy Outlook
Biggio was among the biggest fantasy busts in the middle rounds last year. The Toronto Star noted last spring that Biggio was a candidate to be adversely affected by a new baseball given he had the eighth-lowest average flyball distance on his homers the year prior. Whether or not the baseball was directly correlated, Biggio lost 2.5 percentage points off his HR/FB and nearly 80 points off his slugging percentage last season. He was banged up throughout the campaign, making multiple trips to the injured list with a cervical spine ligament sprain and later dealing with a UCL sprain. He's a patience hitter as evidenced by his career 15.1 BB%, although he could probably stand to be more aggressive within the strike zone. The son of a Hall of Famer, Biggio is 23-for-24 on the basepaths in the big leagues, but there is only modest thump here around the strikeouts. Read Past Outlooks
read more
RANKSFrom Preseason
#327
ADP
#

* Exit Velocity and Barrels/PA % are benchmarked against 2019 data (min 400 PA) and Hard Hit Rate is benchmarked against last season's data (min 400 PA). See here for more exit velocity/barrels stats plus an explanation of current limitations with that data set.
BB/K
0.45
BB Rate
12.5%
K Rate
28.1%
BABIP
.275
ISO
.148
AVG
.202
OBP
.318
SLG
.350
OPS
.668
wOBA
.303
Exit Velocity
88.1 mph
Hard Hit Rate
27.6%
Barrels/PA
4.0%
Expected BA
.193
Expected SLG
.321
Sprint Speed
24.8 ft/sec
Ground Ball %
35.5%
Line Drive %
20.9%
Fly Ball %
43.6%
Prospect Rankings History
View Complete Cavan Biggio Prospect Ranking History
Advanced Batting Stats
Loading Advanced Batting Stats...
Additional Stats
Games By Position
Defensive Stats
Loading Games Played by Position...
Loading MLB Defensive Stats...
Batted Ball Stats
Loading Batted Ball Stats...
Stats Vs Upcoming Pitchers
Want more matchup stats?
View Cavan Biggio vs. Pitcher Stats
Loading Matchup Stats...
Blue Jays Depth Chart
Our full team depth charts are reserved for RotoWire subscribers.
Subscribe Now
Past Fantasy Outlooks
2021
2020
2019
Biggio showed that he's not to be overlooked in Toronto. He led the Buffalo Blue Jays in OBP and remained perfect on steal attempts, going 6-for-6 to make him 20-for-20 so far in his big-league career. Just entering his age-26 season, Biggio is already one of the most patient hitters in baseball as evidenced by the lowest O-Swing% among qualifiers in 2020. His overall Swing% was third lowest and his 15.5 BB% ranked 12th in MLB. A case can be made that he was a little too patient in 2020 as his Meatball Swing% was nearly three percentage points below league average. He would be wise to hunt some pitches earlier in counts if he wants to sustain the rate power from last season -- it seems unsustainable right now with his underwhelming batted-ball metrics. Helping his case is three-position eligibility (2B, 3B, OF) in leagues with a 10-game minimum for 2021, as well as his projected spot atop the Toronto order.
One of the Blue Jays' top prospects, Biggio received the callup to the big leagues in late May and was eased into the starting role at second base, starting 84 games at the position. He also started eight games in the outfield, four at DH and two at first base. Overall it was a solid rookie campaign as he posted a .234/.364/.429 slash line with 16 home runs and 14 stolen bases. He continued the trend of a high-strikeout rate from the minors (28.6%), but he also had a 16.5 BB%, which would have been top five in MLB among qualified hitters had Biggo logged enough plate appearances to qualify. Biggio's sophomore campaign should see him in an everyday role in Toronto, and his quality rookie campaign and 20-20-plus potential make him an appealing fantasy asset, even more so if he can reduce the strikeouts.
Biggio is a legitimate major-league prospect, though he's kind of the third wheel in the trio of well-known, second-generation prospects within the Blue Jays' farm system (behind Vlad Guerrero Jr. and Bo Bichette). The son of Hall of Famer Craig Biggio, Cavan hit 26 homers and stole 20 bases at Double-A New Hampshire last season. The latter total led the Eastern League and he also led the league (by a mile) with 100 walks. However, Biggio struck out 148 times (26.3 K%) as a 23-year-old, which raises questions about his ability to hit major-league pitching. Complicating matters is the fact that the the Blue Jays had Biggio work primarily in the outfield corners during the Arizona Fall League, and if they prefer him out there, it will put more pressure on his bat in the years ahead. It's possible Biggio ultimately breaks into the majors in a utility role.
More Fantasy News