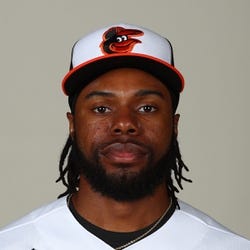 2022 Stats
AVG
.258
HR
16
RBI
64
R
89
SB
34
2023 Projections
AVG
HR
RBI
R
SB
Unlock Our Projections
2023 Fantasy Outlook
Mullins lost more than 100 points off his slugging percentage, but he stole 30 bases for the second consecutive year and thus remains a star in the rotisserie game. His HR/FB was effectively cut in half from 2021, and fittingly, his homer total was essentially halved. Mullins struggled against left-handed pitching, slashing .209/.265/.313 against same-side pitchers compared to .279/.340/.441 against right-handers. Those splits were not nearly as pronounced in 2021, but if they continue, Mullins will leave himself open to platooning, especially if the Orioles do indeed push into a competitive window. The speed is so rare nowadays that Mullins is worthy of early-round consideration in many fantasy formats even if there are lingering questions about his bat. Read Past Outlooks
read more
RANKSFrom Preseason
#

* Exit Velocity and Barrels/PA % are benchmarked against 2019 data (min 400 PA) and Hard Hit Rate is benchmarked against last season's data (min 400 PA). See here for more exit velocity/barrels stats plus an explanation of current limitations with that data set.
BB/K
0.37
BB Rate
7.0%
K Rate
18.8%
BABIP
.299
ISO
.145
AVG
.258
OBP
.318
SLG
.403
OPS
.721
wOBA
.317
Exit Velocity
88.8 mph
Hard Hit Rate
26.8%
Barrels/PA
3.6%
Expected BA
.232
Expected SLG
.349
Sprint Speed
23.3 ft/sec
Ground Ball %
38.7%
Line Drive %
17.9%
Fly Ball %
43.4%
Prospect Rankings History
View Complete Cedric Mullins Prospect Ranking History
Advanced Batting Stats
Loading Advanced Batting Stats...
Additional Stats
Games By Position
Defensive Stats
Loading Games Played by Position...
Loading MLB Defensive Stats...
Batted Ball Stats
Loading Batted Ball Stats...
Stats Vs Upcoming Pitchers
Want more matchup stats?
View Cedric Mullins vs. Pitcher Stats
Loading Matchup Stats...
Orioles Depth Chart
Our full team depth charts are reserved for RotoWire subscribers.
Subscribe Now
Recent RotoWire Articles Featuring Cedric Mullins
2023 Fantasy Baseball Rankings - Way Too Early Top 300 Draft Ranks
48 days ago
48 days ago
James Anderson provides a way too early top 300 rankings for those who have the itch to start drafting for 2023.
Collette Calls: Buckle Up
61 days ago
61 days ago
Jason Collette is excited for the increase in steals which the new rules should bring next season. Which hitters and pitchers will be affected the most?
MLB Barometer: End-of-Season Risers and Fallers
61 days ago
61 days ago
For his end-of-year-wrap-up, Erik Halterman goes by round to list his risers to see how they performed vs. their earned auction value ranking, starting with Mookie Betts in Round 1.
FanDuel MLB: Tuesday Targets
64 days ago
64 days ago
Chris Bennett checks out Tuesday's slate and thinks that Cedric Mullins and the Orioles make for an intriguing stack, weather permitting.
DraftKings MLB: Tuesday Breakdown
64 days ago
64 days ago
Dan Marcus focuses on the last Tuesday slate of the regular season, making his recommendations to help lead you to DFS success.
Past Fantasy Outlooks
2022
2021
2020
2019
Mullins had a few vocal proponents before the 2021 season, yet few listened as Mullins was easily had late in many drafts. All Mullins did was have just the 11th 30-30 season in baseball since the 2011 season. It is worth noting that only Ryan Braun (2011, 2012) has posted back-to-back 30-30 seasons in recent memory. Coming into 2021, Mullins' most redeeming value was that he had 110-percent lock on playing time. He clearly had some talent, so a perpetually rebuilding Baltimore team was going to give him as much playing time as his body and skills could pay for. Given little has changed in Baltimore for 2022, Mullins has the same opportunity before him and could even repeat if he can homer more on the road given 22 of his 30 homers came at Camden Yards. If he's traded out of Baltimore, his outlook changes considerably.
Mullins didn't do much to separate himself from a large group of fringy outfielders in Baltimore, but he at least looked like a legitimate big-leaguer, something that couldn't be taken for granted after he hit a miserable .094/.181/.156 in 22 games in 2019. His .271/.315/.407 slash line this time around was good for a still below-average 95 wRC+, but when combined with good speed (seven steals) and roughly average defense in center, that's a useful enough player. Role questions remain for Mullins, however, as other Oriole outfielders also took steps forward. Additionally, there are questions about whether he can maintain his 2020 level. His 24.2 K% and 5.2 BB% showed poor plate discipline, and he had an awful 2.8% barrel rate. Statcast hated his quality of contact, giving him a .209 xBA and .296 xSLG. Despite his wheels and respectable numbers, Mullins still has work to do to prove he's an everyday player.
Mullins drew the start in center field on Opening Day and appeared to have a handle on the starting job, but after opening the year 6-for-64 with four RBI and 14 strikeouts over the first 22 contests, he was demoted to Triple-A Norfolk where he continued to struggle. The 25-year-old slashed .205/.272/.306 with a 46 wRC+, and a low 5.4 BB% negating a 16.7 K% over 66 games. Ultimately, the O's demoted Mullins again, this time to Double-A Bowie in mid-July. He finally saw his bat come to life while with the Baysox, but this certainly isn't how Mullins saw the 2019 campaign playing out. Even so, he'll likely have a shot to redeem himself during spring training and could wind up once again making Baltimore's Opening Day roster. Whether he'll be able to earn regular work remains to be seen, but it should be considered a long shot, especially after Austin Hays showed promise near the end of the 2019 season.
Mullins made his big-league debut and took over the starting job in center field from Adam Jones in early August, starting hot with a .317/.386/.566 slash line through the end of the month. Things changed quickly as the young outfielder began to struggle in September and finished the season in a 2-for-33 slump. He has kept relatively low strikeout (15.2%) and walk rates (7.2%) through his time in the minors, and trended similarly during his seven weeks in the majors. The 24-year-old has shown modest power but was hurt in 2018 with a mere 12.1% line-drive rate, which ranked third-worst in the majors among players with at least 100 PA. Mullins has a chance to post a 15-15 season with regular work, which should be easy to find on an Orioles roster that is really lacking in big-league caliber outfielders. He finished last season as Baltimore's leadoff hitter and should reprise that role this year.
More Fantasy News