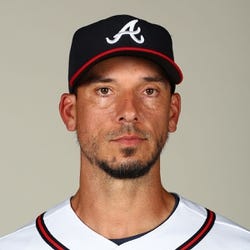 2022 Stats
W-L
9-6
ERA
4.29
WHIP
1.20
K
200
SV
0
Rest-of-Season Projections
W-L
ERA
WHIP
K
SV
Unlock Our Projections
2022 Fantasy Outlook
Morton left Game 1 of the World Series against Houston in the third inning, though not before striking out Jose Altuve on a broken freakin' leg. He had been hit by a comebacker and was forced to undergo surgery to repair a fractured fibula days later. The expectation is that Morton will be ready for the start of spring training. His 2021 regular season was tremendous, especially for a 37-year-old; Morton racked up 14 wins with a 20.9 K-BB% and 1.04 WHIP over 185.2 innings. He's not the extreme groundball pitcher he was earlier in his career, but the heavier reliance on his high-spin curveball in recent years has proven to be a winning recipe. Notably, Morton regained some steam on his fastball last year, and Atlanta brought him back at a $20 million price tag for 2022 -- a statement of faith in the aging arm. Assuming his health checks out in spring training, target Morton as a high-end SP3. Read Past Outlooks
read more
RANKSFrom Preseason
#93
ADP
#