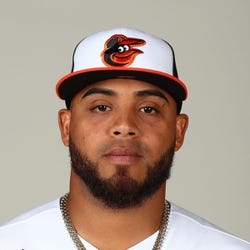 * Exit Velocity, Barrels/BBE %, Balls Hit 95+ MPH %, and Spin Rate are benchmarked against 2019 data (min 30 IP). See here for more exit velocity/barrels stats plus an explanation of current limitations with that data set.
K/BB
1.13
K/9
12.2
BB/9
10.8
HR/9
5.4
Fastball
94.3 mph
ERA
21.60
WHIP
3.30
BABIP
.505
GB/FB
0.73
Left On Base
30.5%
Exit Velocity
80.0 mph
Barrels/BBE
9.3%
Spin Rate
2465 rpm
Balls Hit 95+ MPH
24.1%
Swinging Strike
14.8%
Prospect Rankings History
View Complete Darwinzon Hernandez Prospect Ranking History
Advanced Pitching Stats
Loading Advanced Pitching Stats...
Defensive Stats
Loading MLB Defensive Stats...
Stats Vs Today's Lineup
Want more matchup stats?
View Darwinzon Hernandez vs. Batter Stats
Loading Matchup Stats...
Red Sox Depth Chart
Our full team depth charts are reserved for RotoWire subscribers.
Subscribe Now
Recent RotoWire Articles Featuring Darwinzon Hernandez
Playoff Primer: The Rankings
October 5, 2021
October 5, 2021
Todd Zola ranks players by position for fantasy playoff leagues. Chicago's Jose Abreu is tough to beat at first base.
Mound Musings: A Look at Pitching in the AL East
March 25, 2021
March 25, 2021
Brad Johnson wraps up his bullpen series with a look at the American League East, where in Tampa, Tyler Glasnow leads the Rays pitching.
Spring Training Job Battles: Mid-March Update
March 13, 2021
March 13, 2021
Erik Halterman checks in on spring job battles and notes that the only thing standing between Andrew Vaughn and a spot in the Opening Day lineup is potential service-time manipulation.
Spring Training Job Battles: Let the Competition Begin
February 26, 2021
February 26, 2021
Erik Halterman analyzes the top job battles on every major league team, including a look at the Mets' closer situation. Will Edwin Diaz regain the job this season?
AL FAAB Factor: Waiver Pickups of the Week
August 23, 2020
August 23, 2020
Erik Siegrist sifts through the latest wave of prospect promotions, bullpen shakeups and hot streaks in the American League, and notes that Casey Mize may not be your best pitching target in redraft formats.
Past Fantasy Outlooks
2021
2020
2019
Hernandez is a perfect example of so much potential but so few results. We're talking about a pitcher who has struck out 37.4% of the hitters he has faced in the big leagues over two seasons while walking 18.2% of them. Over half of the plate appearances against him fail to produce a ball in play. He has held the league to a .215 BA and has allowed just one HR in 248 PA against big-league hitters. Yet, he has a career 3.96 ERA and 1.71 WHIP (not a typo) to show for it. The lack of command has limited him mostly to lower-leverage work so far, but when he's on, he is deflating to opponents trying to start a rally. When he is off, he enables rallies to get started with free passes. He does not have the repertoire to start nor the command to pitch high leverage, but should either change, things could get rather interesting.
Hernandez is a mesmerizing pitcher to watch. He can throw his first pitch and you already have your phone out working on your FAAB claim for the week. Yet, by the end of that plate appearance, you've either deleted it, or upped your bid by 50%. He has an electric fastball that dances on its way to the plate. He can throw a devastating breaking ball when he is up in the count and batters have to either protect or are looking fastball. The issues come in between as Hernandez's offerings rarely go where the catcher wants them to go. While 57 strikeouts in 30.1 innings of work should get your attention, so should those 26 walks. He worked 77.2 innings over three levels last year, striking out 136 batters while walking 74. A quasi Steve Dalkowski if you will. If Hernandez could find some consistent command of his pitches, he would be a devastating late-inning reliever.
Hernandez opened some eyes in the Arizona Fall League, fanning 24 in 11.1 innings against some of the most polished hitting prospects in baseball. After spending the bulk of the minor-league season as a starter at High-A Salem, the big southpaw moved to the bullpen late with Double-A Portland and continued to work in relief in the AFL. The changeup is decent but lags behind a 70-grade fastball and impressive slider. He's had major walk issues throughout his professional career, failing to post a BB/9 under 4.0 at any stop. As primarily a fastball-breaking ball arm with shaky command, Hernandez is a long shot to make it as a starter. Thankfully his two bread-and-butter pitches are good enough to where Hernandez can fall back as a high-leverage reliever. While he did not break camp with the team, Hernandez could get the call at any point if the team decides it needs a power lefty out of the bullpen.
More Fantasy News