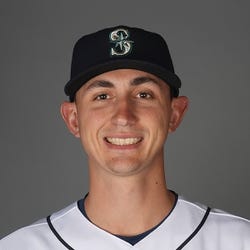 2022 Stats
W-L
7-4
ERA
3.30
WHIP
1.18
K
124
SV
0
Rest-of-Season Projections
W-L
ERA
WHIP
K
SV
Unlock Our Projections
2022 Fantasy Outlook
At this point, Kirby seems like a near finished product by pitching prospect standards, with the main question mark being durability. He regularly went seven or eight days in between starts last year and missed three weeks in May and and another four weeks in July with shoulder/arm issues. All told, the 6-foot-4 righty logged a 2.53 ERA, 1.08 WHIP and 80:15 K:BB in 67.2 innings (15 starts) across High-A and Double-A. He has always had some of the best command and control in the minors, and Kirby now boasts a monster mid-to-high 90s fastball with good life and three secondary offerings with upside -- his plus upper-80s slider is currently his best offspeed pitch. It's easy to see Kirby maxing out as the Mariners' best pitcher and a true frontline arm if he can start pushing up to 150-plus innings, but just getting to 120-plus innings would be an accomplishment in 2022. Read Past Outlooks
read more
RANKSFrom Preseason
#579
ADP
#

* Exit Velocity, Barrels/BBE %, Balls Hit 95+ MPH %, and Spin Rate are benchmarked against 2019 data (min 120 IP). See here for more exit velocity/barrels stats plus an explanation of current limitations with that data set.
K/BB
6.89
K/9
9.3
BB/9
1.4
HR/9
0.9
Fastball
95.4 mph
ERA
3.30
WHIP
1.18
BABIP
.343
GB/FB
1.40
Left On Base
74.3%
Exit Velocity
80.7 mph
Barrels/BBE
3.9%
Spin Rate
2131 rpm
Balls Hit 95+ MPH
20.0%
Swinging Strike
10.5%
Prospect Rankings History
View Complete George Kirby Prospect Ranking History
Advanced Pitching Stats
Loading Advanced Pitching Stats...
Defensive Stats
Loading MLB Defensive Stats...
Stats Vs Today's Lineup
Want more matchup stats?
View George Kirby vs. Batter Stats
Loading Matchup Stats...
Mariners Depth Chart
Our full team depth charts are reserved for RotoWire subscribers.
Subscribe Now
Recent RotoWire Articles Featuring George Kirby
Weekly Pitcher Rankings: And Then There Was One
4 days ago
4 days ago
Robbie Ray tops Todd Zola's weekly pitcher rankings thanks to a pair of home matchups against a pair of struggling opponents.
Yahoo DFS Baseball: Thursday Picks
6 days ago
6 days ago
Mike Barner likes the idea of a Cleveland bat stack against Johnny Cueto and the White Sox on Thursday.
Weekly Pitcher Rankings: Cease Tops a Busy Week
11 days ago
11 days ago
Two-start pitchers fill eight of the top nine spots in Todd Zola's weekly pitcher rankings, but Jacob deGrom earns a spot near the top despite being scheduled for just one start.
Yahoo DFS Baseball: Saturday Picks
11 days ago
11 days ago
Chris Morgan is encouraging you to take a couple Brewers bats versus Jameson Taillon and the Yankees.
DraftKings MLB: Saturday Breakdown
11 days ago
11 days ago
Chris Morgan is looking at a few Mets to rack up some fantasy points against the Pirates.
Past Fantasy Outlooks
2021
2020
On paper, Kirby stacks up with any pitching prospect in the game. The only problem is that we're still mostly working with scouting grades and biographical data, rather than a track record in pro games. His command projects to be as good as, if not better than, that of any other top pitching prospect, which is a nice place to start. He also has a picturesque delivery coming from a prototypical 6-foot-4, 200-pound frame. Kirby's command has typically been the highlight of his scouting report, but his low-90s fastball ticked up and became a mid-90s pitch that touched 99 mph this past summer at the alternate training site. The 20th overall pick in 2019 out of Elon (a small university in North Carolina) also boasts three average or better secondaries, with his slider and changeup each showing plus potential. He is advanced enough to reach the majors with fewer than 100 pro innings under his belt.
Amateur pitchers with Kirby's potentially elite command that also happen to have legitimate stuff are a rare breed. After walking six batters in 88.1 innings as a junior at Elon, Kirby issued zero walks over 23 innings in his debut. He has a prototypical 6-foot-4, 205-pound frame and a picturesque right-handed delivery. While he didn't face tough competition at the small North Carolina school, Kirby has four average or better pitches, with his low-90s fastball playing as a plus pitch due to his command and extension. Given his size, he could realistically gain fastball velocity with pro instruction. With this profile, we should expect excellent numbers, particularly in the lower levels, where his command and deep arsenal should carry the day. If a couple of his offspeed pitches become plus offerings, Kirby could develop into at least a No. 2 starter. Without any improvements, he could be a No. 4.
More Fantasy News