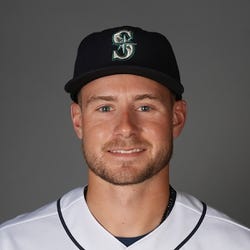 2022 Stats
AVG
.141
HR
7
RBI
17
R
20
SB
5
2023 Projections
AVG
HR
RBI
R
SB
Unlock Our Projections
2023 Fantasy Outlook
Kelenic's sophomore season was worse than his rookie campaign. A strong spring finish earned him a starting job, but Kelenic was soon demoted to Triple-A Tacoma. He earned another callup in late July but was again overmatched by MLB pitching so the visit was again short-lived and he rejoined the Rainers before a final promotion in late September. This time, Kelenic impressed with a 1,107 OPS in seven games before he was hit by a pitch on the hand. While Kelenic's career .758 OPS and 19.1% strikeout rate facing hard stuff isn't great, it's Ruth-ian compared to his .418 OPS and 41.5% strikeout rate versus break balls and changeups. Be it pitch recognition or timing, Kelenic clearly has an issue, but it should be fixable. The catch is Seattle is in win now mode and has depth in the outfield, so Kelenic must hit to play. The talent to turn things round is there, the opportunity is in jeopardy. Read Past Outlooks
read more
RANKSFrom Preseason
#

* Exit Velocity and Barrels/PA % are benchmarked against 2019 data (min 400 PA) and Hard Hit Rate is benchmarked against last season's data (min 400 PA). See here for more exit velocity/barrels stats plus an explanation of current limitations with that data set.
BB/K
0.26
BB Rate
8.8%
K Rate
33.7%
BABIP
.167
ISO
.172
AVG
.141
OBP
.221
SLG
.313
OPS
.534
wOBA
.239
Exit Velocity
86.0 mph
Hard Hit Rate
31.1%
Barrels/PA
7.7%
Expected BA
.172
Expected SLG
.351
Sprint Speed
22.4 ft/sec
Ground Ball %
36.9%
Line Drive %
10.7%
Fly Ball %
52.4%
Prospect Rankings History
View Complete Jarred Kelenic Prospect Ranking History
Advanced Batting Stats
Loading Advanced Batting Stats...
Additional Stats
Games By Position
Defensive Stats
Loading Games Played by Position...
Loading MLB Defensive Stats...
Batted Ball Stats
Loading Batted Ball Stats...
Stats Vs Upcoming Pitchers
Want more matchup stats?
View Jarred Kelenic vs. Pitcher Stats
Loading Matchup Stats...
Mariners Depth Chart
Our full team depth charts are reserved for RotoWire subscribers.
Subscribe Now
Past Fantasy Outlooks
2022
2021
2020
2019
We've been spoiled by some incredible prospect debuts in recent years. Kelenic does not fit in that category as his rookie year was nothing short of a colossal letdown. He finished with a miserable .181/.265/.350 line in 377 PA. Kelenic showed a pulse with an .854 OPS and seven homers over the final month of the season, and he swiped double-digit bags between Triple-A and the majors, but for a large portion of the year he was simply not doing damage on hittable pitches in the strike zone. His struggles in that regard are reflected in a bottom-eighth percentile xBA and middling 87.5 mph avgEV. Nobody these days is foolish enough to extrapolate his September over a full season, but somebody in your draft room is going to bet aggressively on a bounce-back from a player considered a top prospect in the game this time last year. It may be wise to wait another season and invest in a more proven option with that draft capital.
There was a stretch during summer camp in July where Kelenic was not only the prospect du jour, but the talk of the entire baseball world. Videos of his sweet left-handed home run swing were going viral and people were clamoring for him to make the big-league roster. He would have debuted in a 162-game season, but the rebuilding Mariners kept him at the alternate training site throughout the shortened season. With a good spring training, Kelenic will set himself up for a service-time manipulating April call-up or a long-term extension that would facilitate an Opening Day debut. He should assume a prominent spot in the lineup from day one and has five-category upside as a rookie. He could very reasonably go 25/15 during his age-21/22 season, but projecting his batting average and OBP is a more difficult assignment. The draft day price tag figures to only increase as we near the start of the season.
Kelenic has lived up to his billing as the top prep hitter from the 2018 draft, and after climbing from Low-A to Double-A in his first full season, he will soon be knocking on the door of the majors. Acquired from the Mets in last offseason's Robinson Cano/Edwin Diaz trade, Kelenic was supposed to be an average runner with a hit-over-power profile, but he seems faster (20-for-27 on SB attempts) and more intent on pulling the ball out to right field. His 17.9 LD% and 52.2 Pull% at Double-A would be concerning marks if it weren't his third level of his age-19/20 season. Still, it is worth tracking how he performs against upper-level pitching now that he can't just hunt fastballs in hitter's counts. A back injury limited him to three games in the Arizona Fall League. The Mariners had an overly aggressive promotion schedule for him last year and there's no reason to expect that to stop in 2020 if he performs.
The Mets cashed out Kelenic before his full-season debut -- if they had not, Seattle reportedly would not have included Edwin Diaz in the deal. Through 12 games in the GCL, he looked like the best player from the 2018 draft. That production was unsustainable (.514 BABIP, 58.3 Pull%), but it made him the talk of the prospect community. The No. 6 overall pick was promoted to the Appy League, where his production normalized and we got a better sense of his true talent. He showed plus speed (11-for-12 on SB attempts), hit for power (.178 ISO) and demonstrated a good handle of the strike zone (11.0 BB%, 19.5 K%). The rep on Kelenic coming into the draft was that he may be the best prep hitter in the class. He had reverse splits (.256/.340/.426 in 200 PA vs. RHP, .409/.490/.636 in 51 PA vs. LHP), which will be something to track at Low-A. Using the whole field more often will allow him to reach his ceiling as a five-category OF2.
More Fantasy News