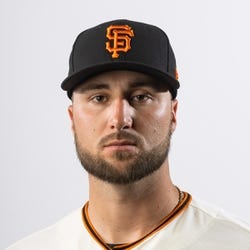 2022 Stats
AVG
.215
HR
11
RBI
25
R
34
SB
2
Rest-of-Season Projections
AVG
HR
RBI
R
SB
Unlock Our Projections
2022 Fantasy Outlook
With Buster Posey retiring, Bart's path to big-league at-bats has never been clearer. However, he has a 31.6 K% and 6.1 BB% in 396 plate appearances between Triple-A and the majors, and he is entering his age-25 season. Even for a catcher, those plate skills are pretty poor, and Bart projects as a batting average drain in the short term. He has plus raw power and hit 10 home runs in 67 games at Triple-A last year, but he still hasn't hit a long ball in 35 MLB games. Bart improved as a defender last year and will compete with another strong defender in Curt Casali for playing time, barring a post-lockout acquisition of a better option. Read Past Outlooks
read more
RANKSFrom Preseason
#347
ADP
#

* Exit Velocity and Barrels/PA % are benchmarked against 2019 data (min 400 PA) and Hard Hit Rate is benchmarked against last season's data (min 400 PA). See here for more exit velocity/barrels stats plus an explanation of current limitations with that data set.
BB/K
0.23
BB Rate
8.9%
K Rate
38.5%
BABIP
.326
ISO
.149
AVG
.215
OBP
.296
SLG
.364
OPS
.660
wOBA
.296
Exit Velocity
87.3 mph
Hard Hit Rate
33.6%
Barrels/PA
5.2%
Expected BA
.210
Expected SLG
.370
Sprint Speed
22.6 ft/sec
Ground Ball %
42.9%
Line Drive %
21.1%
Fly Ball %
36.1%
Prospect Rankings History
View Complete Joey Bart Prospect Ranking History
Advanced Batting Stats
Loading Advanced Batting Stats...
Additional Stats
Games By Position
Defensive Stats
Loading Games Played by Position...
Loading MLB Defensive Stats...
Batted Ball Stats
Loading Batted Ball Stats...
Stats Vs Upcoming Pitchers
Want more matchup stats?
View Joey Bart vs. Pitcher Stats
Loading Matchup Stats...
Giants Depth Chart
Our full team depth charts are reserved for RotoWire subscribers.
Subscribe Now
Past Fantasy Outlooks
2021
2020
2019
Bart was in way over his head last season, as he was not only making a huge jump in terms of the quality of pitching he was trying to hit, but he was learning to be a big-league catcher without much of a support system. Buster Posey opted out of the season, so there wasn't a vet for him to lean on. Bart only had 22 games under his belt at Double-A, so he shouldn't have been expected to excel on offense, even under the best of circumstances. He hit the ball hard 48.4 percent of the time, per Statcast, but every other aspect of his offensive debut was poor. He has plus raw that should manifest much more in games this season, even if it might be a couple years before he hits for a solid batting average. The trouble with betting on a post-hype breakout in redraft leagues is that he could very well open the year at Triple-A to continue honing his craft on both sides of the ball.
Bart, who is a plus defensive catcher, is a better real-life prospect than a fantasy one, but his 60-grade game power certainly makes him appealing for fantasy purposes as well. He performed better the higher he climbed, slashing .314/.411/.581 with a 12.1 BB% and 21.8 K% in 31 games at Double-A and the Arizona Fall League after logging a 116 wRC+ as a 22-year-old in the Cal League. Bart's line drive rate has been below average and his 30.0 Hard% was not great, given his age/level, but he uses the whole field and has not struck out so much that he would project to hit for a harmful batting average in the majors. Hand and thumb injuries limited him to 89 games, but the No. 2 overall pick from 2018 accomplished enough in his first full season that he should open the year at Triple-A. Buster Posey and Brandon Belt are under contract through 2021, but Bart should still debut sometime this summer.
Track down any trustworthy pre-draft scouting report on Bart, who went second overall last year to the Giants ($7.025 million bonus), and phrases like "fringe-average hit tool" or "power-over-hit" will pop up. The power was on full display in pro ball (13 HR in 228 PA), but he also hit .294 with a 20.6 K%. So, either every trusted evaluator was wrong about his ability to hit for a high average, or a high-pedigree 21-year-old hitter feasted on low-level pitchers in a small sample. It is likely the latter, as he barely walked (5.7 BB%) and over 50% of his hits went to the pull side. Even so, a high-end defensive catcher with 30-homer pop whose playing time will never be at risk only needs to hit .235 to be a perennial top-five fantasy catcher. Case in point: Salvador Perez hit .235 with 27 home runs last year and finished tied for third in earned auction dollars at the position. That seems like a median outcome for Bart, and there is a chance he blows past that.
More Fantasy News