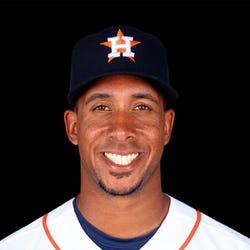 Out
Injury Shoulder
Est. Return 2/1/2023
2022 Stats
AVG
.288
HR
5
RBI
26
R
28
SB
1
2023 Projections
AVG
HR
RBI
R
SB
Unlock Our Projections
2023 Fantasy Outlook
The 35 year old DH has the shoulders of a person twice that age as Brantley has once again needed shoulder surgery to fix an acute problem. He entered the season hitting .300 in four consecutive seasons and finished the injury-ridden 2022 season at .288 as the guy could seemingly roll out of bed and slap a single up the middle without missing a beat. The trouble has been his body is failing him and he is now DH only for fantasy drafts as well as real baseball utilization because it would be the best way to keep him healthy moving forward. The DH-only status further suppresses his draft day value as it is tough to lose that in-draft flexibility with someone who is a one-category producer these days so Brantley now becomes a very late round batting average partner for managers looking for late insurance in that category. Read Past Outlooks
read more
RANKSFrom Preseason
#