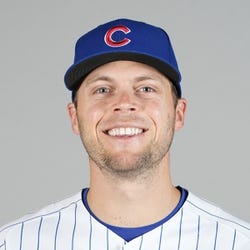 2022 Stats
AVG
.281
HR
10
RBI
55
R
60
SB
20
2023 Projections
AVG
HR
RBI
R
SB
Unlock Our Projections
2023 Fantasy Outlook
Hoerner's role to begin 2022 was murky after Chicago added Andrelton Simmons in March, but the veteran shortstop battled injuries and played in only 35 games before he was cut loose in August. Hoerner worked as the Cubs' primary shortstop and was a plus defender, and he finished the year with a .281/.327/.410 slash line, 10 home runs, 55 RBI and 20 stolen bases. Entering the year, he had only three homers and eight stolen in 112 career games, so the improvements in those areas are a significant development for his fantasy appeal. Hoerner should have a starting spot in the middle infield to open 2023, regardless of whether or not the Cubs bring in a shortstop via free agency. Read Past Outlooks
read more
RANKSFrom Preseason
#

* Exit Velocity and Barrels/PA % are benchmarked against 2019 data (min 400 PA) and Hard Hit Rate is benchmarked against last season's data (min 400 PA). See here for more exit velocity/barrels stats plus an explanation of current limitations with that data set.
BB/K
0.49
BB Rate
5.4%
K Rate
11.0%
BABIP
.300
ISO
.129
AVG
.281
OBP
.327
SLG
.410
OPS
.736
wOBA
.322
Exit Velocity
87.2 mph
Hard Hit Rate
23.9%
Barrels/PA
2.1%
Expected BA
.270
Expected SLG
.366
Sprint Speed
25.5 ft/sec
Ground Ball %
46.1%
Line Drive %
20.7%
Fly Ball %
33.2%
Prospect Rankings History
View Complete Nico Hoerner Prospect Ranking History
Advanced Batting Stats
Loading Advanced Batting Stats...
Additional Stats
Games By Position
Defensive Stats
Loading Games Played by Position...
Loading MLB Defensive Stats...
Batted Ball Stats
Loading Batted Ball Stats...
Stats Vs Upcoming Pitchers
Want more matchup stats?
View Nico Hoerner vs. Pitcher Stats
Loading Matchup Stats...
Cubs Depth Chart
Our full team depth charts are reserved for RotoWire subscribers.
Subscribe Now
Recent RotoWire Articles Featuring Nico Hoerner
2023 Fantasy Baseball Rankings - Way Too Early Top 300 Draft Ranks
45 days ago
45 days ago
James Anderson provides a way too early top 300 rankings for those who have the itch to start drafting for 2023.
Collette Calls: Hitting Bold Predictions Reviews
53 days ago
53 days ago
Jason Collette looks back at his bold predictions from last offseason, examining what went right and what went wrong.
Collette Calls: Buckle Up
58 days ago
58 days ago
Jason Collette is excited for the increase in steals which the new rules should bring next season. Which hitters and pitchers will be affected the most?
FanDuel MLB: Sunday Targets
63 days ago
63 days ago
Chris Morgan has offered a couple promising value plays, including Bryan Reynolds facing Adam Wainwright and the playoff-locked Cardinals.
MLB: One Man's Trash... (Week 24)
72 days ago
72 days ago
Jeff Zimmerman searches for buried treasure among the players most frequently dropped over the last week. Does Keston Hiura still have fantasy value?
Past Fantasy Outlooks
2022
2021
2020
2019
Hoerner is the other half of the powerless duo which was expected make up the bottom two spots of the Cubs' batting order in 2022. Hoerner does not have the elite bat-to-ball skills that Nick Madrigal has, but he hit .304 in college and .294 in the minors while maintaining a .272 average at the major-league level. He has 90th percentile sprint speed yet has done little running at the big-league level, stealing eight bases in 13 attempts. He appeared set to start in the middle infield alongside Madrigal in 2022, but Chicago opted to bring in veteran shortstop Andrelton Simmons. Hoerner's outlook is now clouded by the addition, as there is now no clear path to an everyday role if everyone remains healthy.
Hoerner acquitted himself quite well in 2019, as his .282/.305/.436 line in 20 games at the MLB level was quite impressive for someone who played in just 89 career minor-league games. He wasn't able to carry that level of success into his second season, however, looking overmatched en route to a .222/.312/.259 slash line with zero homers. He'll still be 23 on Opening Day and was only just drafted in 2018, so it's not as if we should give up on him at this stage. He'll also seemingly get the playing time necessary to keep developing, with the Cubs selling off pieces. There are some red flags, however, particularly pertaining to the notion of fantasy upside. His contact simply isn't nearly good enough, as his career 1.3% barrel rate and 2.2 degree launch angle demonstrate. His defensive versatility and youth will get him playing time, while his contact skill and modest speed are the top selling points in fantasy.
Hoerner would have debuted in 2020 under normal circumstances, but he was the best option at shortstop in September when Javier Baez and Addison Russell got hurt, so he got the emergency callup with the Cubs fighting for a playoff spot. Including a 2018 stint in the Arizona Fall League, Hoerner only played 110 games before reaching the majors, yet he hit .282 with a 13.4 K% and didn't look overmatched at all. He could end up with a plus hit tool, which will be important, as he doesn't have any other plus tools. Hoerner could develop 20-homer power and may chip in 8-10 steals, but the main selling point is that he could be a good enough hitter to bat second in a good lineup. His walk rate should improve as he gets more reps. Baez isn't going anywhere, but Hoerner could be his long-term double-play partner. In the short term, he may head to Triple-A for a couple months before joining the MLB roster for good.
Rarely does a hitter get sent to the Arizona Fall League the year he was drafted. Even rarer is the prospect who gets that assignment and performs as one of the league's best hitters. Hoerner finished his season by hitting .337/.362/.506 in 89 AFL at-bats, but let's go back at the beginning. The Cubs selected the Stanford shortstop with the No. 24 pick in the draft -- potentially this regime's best pick since Kris Bryant in 2013. Hoerner may not stick at shortstop, but unlike recent first-round picks Kyle Schwarber and Ian Happ, making consistent contact shouldn't be a problem. Hoerner produced with a wood bat in the Northwoods and Cap Cod leagues, and that success carried over across brief stops at three levels before an elbow injury ended his regular season, prompting the AFL assignment. If he maxes out, Hoerner will be a plus hitter with plus speed and 15-homer pop. He should be one of the first 2018 draftees to reach the majors.
More Fantasy News