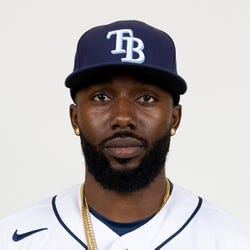 2022 Stats
AVG
.263
HR
20
RBI
89
R
72
SB
32
2023 Projections
AVG
HR
RBI
R
SB
Unlock Our Projections
2023 Fantasy Outlook
Arozarena turned in his second consecutive 20-20 campaign despite not hitting his first long ball until May 9. He added 12 bags to his 2021 total and cut his strikeout rate by close to four percentage points. Statcast's expected stats paint Arozarena's game in a rather unfavorable light, but keep in mind only Trea Turner, Jose Ramirez and Arozarena have gone 20-20 the past two seasons in Major League Baseball. This is a rare skill set and the outfielder seems to like his round numbers as he briefly talked about the possibility of 20-40 after reaching 20 homers in late September. A lot hinges on Arozarena continuing to play every single day, which generally goes against the Rays' philosophy. He has been the exception to the rule the past couple seasons. Read Past Outlooks
read more
RANKSFrom Preseason
#

* Exit Velocity and Barrels/PA % are benchmarked against 2019 data (min 400 PA) and Hard Hit Rate is benchmarked against last season's data (min 400 PA). See here for more exit velocity/barrels stats plus an explanation of current limitations with that data set.
BB/K
0.29
BB Rate
7.1%
K Rate
24.2%
BABIP
.325
ISO
.183
AVG
.263
OBP
.327
SLG
.445
OPS
.773
wOBA
.338
Exit Velocity
89.9 mph
Hard Hit Rate
31.5%
Barrels/PA
5.3%
Expected BA
.234
Expected SLG
.382
Sprint Speed
24.2 ft/sec
Ground Ball %
50.7%
Line Drive %
16.4%
Fly Ball %
32.9%
Prospect Rankings History
View Complete Randy Arozarena Prospect Ranking History
Advanced Batting Stats
Loading Advanced Batting Stats...
Additional Stats
Games By Position
Defensive Stats
Loading Games Played by Position...
Loading MLB Defensive Stats...
Batted Ball Stats
Loading Batted Ball Stats...
Stats Vs Upcoming Pitchers
Want more matchup stats?
View Randy Arozarena vs. Pitcher Stats
Loading Matchup Stats...
Rays Depth Chart
Our full team depth charts are reserved for RotoWire subscribers.
Subscribe Now
Past Fantasy Outlooks
2022
2021
2020
2017
Arozarena is many things, but one thing he never is is boring. He set an impossibly high bar for his fantasy output with his improbable performance in September and October of 2020, yet still was one of just 10 players to post a 20-20 season and even did something only mimicked by Shohei Ohtani in that he hit 20 homers, stole 20 bases and was caught 10 times. By mid-June, Arozarena was 10-for-11 in steals, but then he went 10-for-19 the rest of the way, going over two months without a steal at one point while seven of his 20 steals came in the final three weeks of the season. He is streaky in every way possible, and his expected offensive statistics should raise some eyebrows considering his results well outpaced his expected outcomes. He will punish misplaced fastballs, but the league has also shown an ability to use his aggressiveness against him to get himself out. He's a risky early-round pick.
A hitter who was never a top-100 prospect and just had the best statistical postseason ever is technically still a prospect. He doesn't feel like it anymore, though, and Arozarena is six years older than Wander Franco. Arozarena has notable regular-season splits (279 wRC+, 11.1 K% vs. LHP, 125 wRC+, 31.9 K% vs. RHP), but he logged a 1.408 OPS, eight HR, and a 21.6 K% against RHP in his historic postseason run. Small samples are all we have with him against MLB pitching -- he hit lefties better than righties in the minors -- but it's safe to say he has the power (career .381 ISO) and sprint speed (93rd percentile) to go 20/20 in a full season. There is no doubt Arozarena will play almost every day early in 2021, but the Rays can be ruthless with platoons, so the main risk on this loaded roster would be that he struggles against righties early and starts ceding playing time to left-handed hitters.
Arozarena made his big-league debut at age 24, performing well in a small sample. He spent the bulk of the season in the high minors, hitting .344/.431/.571 with 15 homers and 17 steals in 92 games at the Double-A and Triple-A levels. All told, Arozarena had a 1.174 OPS in 84 PA against southpaws across the three levels (he had a 1.000 OPS in 96 PA vs. LHP in 2018), which was part of the appeal when the platoon-happy Rays acquired him from St. Louis in a multi-player offseason deal. His 12 home runs in 64 games at Triple-A were at least partially the product of the juiced ball at that level, but his sprint speed is in the 96th percentile. As one of their outfielders with minor-league options remaining, Arozarena is a long shot to break camp with the Rays. However, his ability to handle all three outfield spots and crush lefties could lead to opportunities at some point this summer.
Arozarena, who has been labeled as one of the top young Cuban prospects, inked a deal with the Cardinals in July of 2016. The 21-year-old's skill set is highlighted by his advanced plate discipline, plus contact skills and impressive speed on the basepaths. He operates more as a contact hitter, but has the tools to develop into a modest home run hitter in the future. During his last full season in the Cuban Serie Nacional, Arozarena batted .291/.412/.419 with 15 steals (21 attempts). He spent the 2015-2016 season playing in the Mexican Northern League, where he led all players in batting average and stolen bases. It is yet to be seen what position he will play for the Cardinals, as he has seen extended time at second base and the outfield in the past. It wouldn't be a surprise to see him start the season in full-season ball.
More Fantasy News