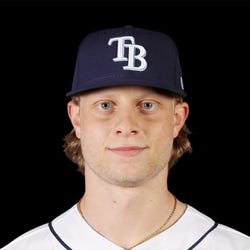 Out
Injury Elbow
Est. Return 2/1/2024
2022 Stats
W-L
1-2
ERA
5.00
WHIP
1.33
K
30
SV
0
2023 Projections
W-L
ERA
WHIP
K
SV
Unlock Our Projections
2023 Fantasy Outlook
If you play in a reset league format, you can stop reading this outlook. If you are in a keeeper or a dynasty league, you are unlikely to see any work out of Baz at the big league level in 2023 as he recovers from a late September Tommy John Surgery. It is unfair to compare the situation to Tyler Glasnow as that surgery happened in early August. That then puts us into the Justin Verlander high bar of returning after a year off and winning the Cy Young award. Baz is an extremely talented arm whose high water mark for innings in a single season, even when combining minors and majors, is 92 innings in 2021. He hsa worked just over 40 innings as a big league pitcher and has given up 1.8 homers per nine innings in that time, so perhaps the long rehab process can give him a sorely needed changeup or maybe even reset his career path to a dominant reliever as he was once projected in his time with Pittsburgh. Read Past Outlooks
read more
RANKS
#