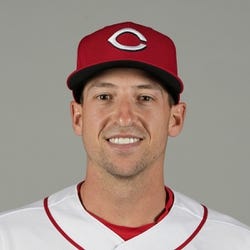 2022 Stats
AVG
.211
HR
2
RBI
8
R
12
SB
0
2023 Projections
AVG
HR
RBI
R
SB
Unlock Our Projections
2023 Fantasy Outlook
Part of the package of prospects the Twins sent to Cincinnati in the Tyler Mahle trade, Steer finds himself in a good situation from a home park and playing time standpoint. He played 14 games at third base, nine games at first base and five games at second base, and he should once again move around the diamond a bit, depending on the performance of veterans Joey Votto and Mike Moustakas. With the Reds in a rebuild and Steer having mastered Triple-A, playing time is less of a concern than output. He isn't a great athlete or runner, so it will have to be his bat that carries him. Steer, who turned 25 this offseason, lacks plus raw power or a plus hit tool, but he could hit around .240 with 20 home runs over a full season while being a good home streamer. Read Past Outlooks
read more
RANKSFrom Preseason
#