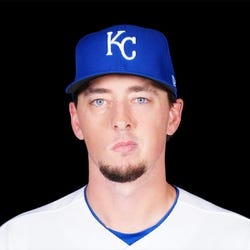 * Exit Velocity, Barrels/BBE %, Balls Hit 95+ MPH %, and Spin Rate are benchmarked against 2019 data (min 30 IP). See here for more exit velocity/barrels stats plus an explanation of current limitations with that data set.
K/BB
6.00
K/9
8.8
BB/9
1.5
HR/9
1.1
Fastball
95.7 mph
ERA
4.04
WHIP
1.18
BABIP
.328
GB/FB
0.95
Left On Base
66.5%
Exit Velocity
83.3 mph
Barrels/BBE
4.5%
Spin Rate
2096 rpm
Balls Hit 95+ MPH
23.3%
Swinging Strike
12.9%
Advanced Pitching Stats
Loading Advanced Pitching Stats...
Defensive Stats
Loading MLB Defensive Stats...
Stats Vs Today's Lineup
Want more matchup stats?
View Taylor Clarke vs. Batter Stats
Loading Matchup Stats...
Royals Depth Chart
Our full team depth charts are reserved for RotoWire subscribers.
Subscribe Now
Recent RotoWire Articles Featuring Taylor Clarke
Closer Encounters: Relief Market Primer
129 days ago
129 days ago
Ryan Rufe breaks down the relievers who could be on the move in the next few days as well as their potential destinations.
The Z Files: Sometimes, Crime Does Pay
198 days ago
198 days ago
Todd Zola examines the league-wide stolen-base environment and identifies some speedy players who could be valuable as streaming options, including Andres Gimenez.
Past Fantasy Outlooks
2021
2020
Clarke broke through to the major leagues in 2019 and worked primarily as a starter. He posted a 5.31 ERA, buried by allowing 2.4 HR/9 across 84.2 innings. In 2020, his role changed thanks to the addition of Madison Bumgarner as he began the season in middle and long relief. He posted a passable 3.54 ERA, as a reliever, though his skills were far from spectacular, as he mustered only a 17:10 K:BB across 20.1 innings. Things only worsened once he was pushed back into the starting rotation after Bumgarner and Merrill Kelly landed on the injured list, as he logged a 5.09 ERA and 23:11 K:BB. Whether a starter or reliever, Clarke has been prone to the long ball, logging a 2.2 HR/9 across 128 total innings in the big leagues. Heading into 2021, Clarke projects to start the season as a long reliever and potential swing man.
Clarke worked in a swing role for Arizona last year with mixed results. He lacks one plus pitch, but has a full bag of pitches he slings toward the plate to keep hitters off-balance and guessing. The troubles arise when he falls behind in the count as 22 of his 23 home runs came when the batter was even or ahead in the count. The league hit .194 against him when Clarke held the high ground, .206 when the hitter held the high ground, but a whopping .356 when the count was even. That speaks to an issue with pitch execution. He has the stuff and profile to be a solid fourth starter if it all comes together, but he does not have the stuff to get away with mistakes and was harshly reminded of that in 2019. He could be a Ryan Yarbrough with a delivery adjustment.
More Fantasy News