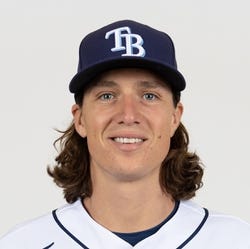 60-Day IL
Injury Elbow
Est. Return 9/28/2022
2022 Stats
W-L
0-0
ERA
0.00
WHIP
0.00
K
0
SV
0
Rest-of-Season Projections
W-L
ERA
WHIP
K
SV
Unlock Our Projections
2022 Fantasy Outlook
Glasnow was pitching at a Cy Young level in 2021 before Major League Baseball ceased looking the other way on how pitchers were enhancing their grips. Two starts into the new era, Glasnow left the mound for good and eventually needed Tommy John surgery to fix his elbow. The right-hander was outspoken in the media about how he felt going from some grip to none without any real lead time contributed to his injury. He will not throw a pitch in 2022 for Tampa Bay, so his value is in keeper league formats only. The mantra should be that pitchers take two full years to pick up where they left off, so even keeper league managers should prepare for a bumpy first half of the 2023 season. Read Past Outlooks
read more
RANKSFrom Preseason
#598
ADP
#