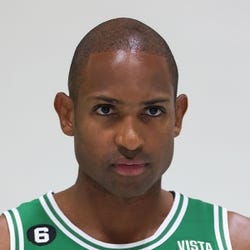 2022 Stats
PTS
9.2
REB
6.1
AST
2.6
STL
0.5
BLK
1.0
ROS Projections
PTS
REB
AST
STL
BLK
Unlock Our Projections
2022 Fantasy Outlook
After being rested by OKC for the second half of the 2020-21 season, Big Al returned to Boston and generated 10.2 points, 7.7 rebounds, 3.4 assists and 1.3 blocks over 29.1 minutes per game. Yes, Robert Williams is the more dynamic big in Boston, but Horford provides the steady day-to-day production down low that the Celtics crave. And with Daniel Theis now in Indiana, Boston might lean on Horford and Williams even more. Understandably, it was reported in July that Horford is expected to face multiple workload restrictions in 2022-23. Look for the veteran to miss the second of most back-to-backs. Plus, while Horford will still start, Boston would love for him to play fewer minutes per game and be fresh for the playoffs. Coach Ime Udoke will probably experiment with multiple small-ball lineups to keep Horford fresh. Read Past Outlooks
read more
Height 6'9"
Weight 240
DOB 6/3/1986
College Florida
Drafted 1st Rd, #3 in 2007
$Signed a two-year, $20 million contract extension with the Celtics in December of 2022.
Personal Bio/PreCareer Summary

Alfred Joel Horford Reynoso was born in Puerto Plata, Dominican Republic, to Arelis Reynoso and Tito Horford. His father was drafted in the second round of the 1988 NBA Draft and played three years in the NBA for Milwaukee and Washington. Horford's uncle, Kelly, played college basketball at Florida Atlantic University in the early 1990s, while his brother Jon played for Michigan and Florida. Al Horford has two other brothers -- Josh and Christian -- and two sisters, Anna and Maria. The Horford family moved to Lansing, Michigan, in 2000. There Al attended Grand Ledge High School in Grand Ledge. As a senior, he averaged 21 points, 13 rebounds and five blocks per game and was named Class A Player of the Year. Horford ended his tenure at Grand Ledge with seven school records, including most career points (1,239). Horford has been involved in many charitable causes since reaching the NBA. He was awarded the NBA Cares Community Assist Award for March 2011, in part due to his support relief efforts in Japan and the Pacific region following a devastating earthquake and tsunami. In 2019, he partnered with the Built With Chocolate Milk campaign to put on a basketball clinic for 30 middle school and high school students. He has also been involved with Basketball Without Borders, the Make-A-Wish Foundation, the NBA's fight against AIDS and as an ambassador for elephants and rhinos with WildAid. In addition, Horford spent a summer reconstructing basketball courts in Puerto Plata, his hometown, and put together youth basketball clinics. In 2020, he donated $500,000 to support coronavirus relief in the Dominican Republic as well as in each region of the United States where he's played for a team. Learn more about Horford by following him on Twitter (@Al_Horford) and on Instagram (@alhorford). As a freshman at Florida, Horford played 32 games (25 starts) and averaged 5.6 points, 6.5 rebounds and 1.6 blocks across 22.8 minutes per game. As a sophomore, he played 39 games (all of them starts) and averaged 11.3 points, 7.6 rebounds, 1.9 assists, 1.7 blocks and 1.0 steals in 25.9 minutes. That fueled a Second Team All-SEC selection. As a junior, he played 38 games (36 starts) and averaged 13.2 points, 9.5 rebounds, 2.2 assists and 1.8 blocks in 27.8 minutes. Those numbers got him onto the AP All-American Third Team. Horford's collegiate career highs stood at 22 points, 18 rebounds, seven assists, seven blocks and four steals. He declared for the NBA Draft following his junior year and was chosen with the third overall pick in the 2007 NBA Draft by the Atlanta Hawks.