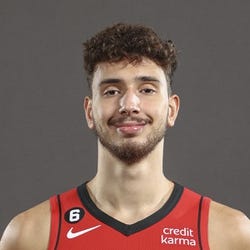 2022 Stats
PTS
15.4
REB
8.8
AST
3.5
STL
0.9
BLK
1.0
ROS Projections
PTS
REB
AST
STL
BLK
Unlock Our Projections
2022 Fantasy Outlook
The rebuilding Rockets selected Sengun with the 16th pick in the 2021 draft, slotting him into their frontcourt that also contained Christian Wood. Wood's presence certainly impacted Sengun during his rookie season, limiting him to 21 minutes per game. Despite relatively limited run, he still averaged 9.6 points, 5.5 rebounds, 2.6 assists, 0.8 steals, 0.9 blocks and 0.4 three-pointers per game. Across the six games he logged at least 30 minutes, he provided 14.7 points, 9.3 rebounds, 4.2 assists and 1.0 blocks. With plenty of potential in Sengun, and the team going nowhere fast, the Rockets dealt Wood to the Mavericks this offseason, which should open up the starting center job for Sengun. A young, exciting core is starting to take shape between Sengun, Jalen Green and Jabari Smith. With Sengun likely to play around 30 minutes per game in his new role, he can provide enough production across the board to be extremely valuable. He'll likely be a trendy pick to have a breakout season, so he could be long gone by the time the middle rounds roll around. Read Past Outlooks
read more
Height 6'11"
Weight 243
DOB 7/25/2002
College Turkey
Drafted 1st Rd, #16 in 2021
$Signed a two-year, $6.59 million contract with the Rockets in August of 2021. Rockets exercised $3.54 million team option for 2023-24 in October of 2022. Contract includes $5.42 million team option for 2024-25.
Personal Bio/PreCareer Summary

Alperen Sengun was born in July of 2002 in Giresun, Turkey. As a child, Sengun was torn between focusing on professional basketball or swimming. From 2012 to 2014, Sengun played ball with the youth teams of the sports club of Giresun University. After being discovered at youth sports festival, Sengun was invited to join a youth team of the Turkish club Bandırma, known then as Banvit. At age 12, he signed a youth contract with Banvit and played in their system through 2019. In the 2018-19 season, Sengun led Banvit to the Turkish Basketball Junior League championship and earned MVP honors. That same season he also played in 29 games for Bandırma Kırmızı of the second division Turkish First League (TBL). For 2019-20, Sengun joined the first division Turkish Super League (BSL) club Teksut Bandirma, with whom he averaged 6.3 points and 4.0 rebounds over 14.5 minutes per game. In the summer of 2020, Sengun signed a three-year contract with the Turkish club Besiktas. That year he posted 19.2 points, 9.4 rebounds, 2.5 assists, 1.3 steals, and 1.7 blocks across 29 regular-season BSL games and earned MVP honors. Upon winning the MVP award, Sengun announced he was entering the 2021 NBA Draft. On draft night, the Houston Rockets, after a trade with the OKC Thunder, selected Sengun with the 16th overall pick.

CHouston Rockets
See All NBA Rumors
2021 Fantasy Outlook
One of the most intriguing big men in the 2021 NBA Draft, Sengun landing with a rebuilding team puts him in an advantageous fantasy situation. While he'll take a backseat to Christian Wood and free agent signee Daniel Theis, Sengun's path to a consistent role is relatively clear. After averaging a double-double with 3.0 blocks per game in Summer League, Sengun has built up some momentum, and he'll be a name worth monitoring as the Rockets' rotation takes shape early in the season. Sengun, who turned 19 just days before the Draft, averaged 18.9 points, 8.7 rebounds, 2.7 assists, 1.6 blocks and 1.3 steals in 37 games for Turkish club Besiktas last season. If he's able to secure a decent workload as a rookie, Sengun could be worth a speculative bench spot in standard leagues.
More Fantasy News