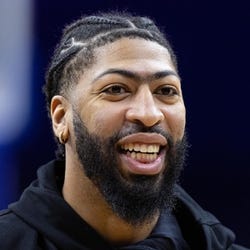 2022 Stats
PTS
28.6
REB
12.8
AST
2.6
STL
1.4
BLK
2.4
ROS Projections
PTS
REB
AST
STL
BLK
Unlock Our Projections
2022 Fantasy Outlook
There's little debate that Davis is among the game's most talented big men, but his inability to stay healthy has put a significant dent in his fantasy value during the past two campaigns. Last season, he played in only 40 of the Lakers' 82 contests after missing exactly half of the team's games in 2020-21. The impact of his absences was especially painful in fantasy last season, as he played in only three contests beyond the All-Star break. When he was on the court, Davis' offensive numbers -- 23.2 points per game on 53.2 percent shooting from the field -- were in line with his career output. However, he has inexplicably fallen off as a free-throw shooter over the past two years, shooting a then-career-worst 73.8 percent from the line two campaigns ago before falling even further to 71.3 percent last season. His three-point shooting has also taken a hit, and he made an ugly 18.6 percent of his tries from beyond the arc during his most recent campaign. On a positive note, Davis bounced back from a down season in the blocks department in 2020-21 to register 2.3 swats per contest last year, and he pulled down nearly 10 rebounds per game. Davis is one of the few players on the Lakers who is locked in with the organization for multiple seasons, and the team's success next year should again primarily ride on the shoulders of him and LeBron James. From a fantasy perspective, Davis' combination of offensive production and difference-making defensive numbers are salivating. Any questions about his value revolve far more around health than talent. Read Past Outlooks
read more
Height 6'10"
Weight 253
DOB 3/11/1993
College Kentucky
Drafted 1st Rd, #1 in 2012
$Signed a four-year, $146.68 million contract with the Lakers in December of 2020. Contract includes $43.22 million early termination option for 2024-25.
Personal Bio/PreCareer Summary

Anthony Marshon Davis Jr. was born in Chicago on March 11, 1993, to Erainer Davis and Anthony Davis Sr. He has a twin sister, Antoinette, and an older sister, Iesha, who played basketball at Daley College. Davis played high school basketball for Perspectives Charter School in Chicago. He experienced a rapid growth spurt during his high-school years, growing 10 inches between his freshman and senior seasons. During his senior year, he averaged 32 points, 22 rebounds and seven blocked shots per game. In high school, Davis garnered numerous honors, including selections to the 2011 McDonald's All-American Game and the 10th annual Jordan Brand Classic, where he took home co-MVP honors. He was also a first team USA Today All-USA high school basketball team selection and a first-team Parade All-American. Known for his unibrow, in 2012, Davis trademarked the phrases "Fear The Brow" and "Raise The Brow." He has received the NBA Cares Community Assist Award twice in recognition of his charitable efforts throughout New Orleans. In 2014, Davis launched AD's Flight Academy, which consisted of monthly events with various groups in the Greater-New Orleans area during the season. He won a new Kia as the 2017 NBA All-Star Game MVP and gave the car to a mother of two in conjunction with the Kingsley House, a local charitable organization. Follow Davis on Twitter at @AntDavis23 and on Instagram at @antdavis23. Davis' game evolved remarkably during his one season at Kentucky in 2011-12. The forward with seemingly extendable arms appeared to improve in each game. In an early-season highlight, Davis blocked a shot against Jon Henson of North Carolina to save a win for the Wildcats. He blocked at least three shots in his first seven games and had a season-high eight rejections along with 15 points and 15 rebounds in a win over St. John's. Davis had 20 double-doubles and averaged 14.2 points and 10.4 rebounds along with 4.7 blocks to lead the nation. In the NCAA Tournament, the Wildcats were able to avenge one of their two losses as Davis had nine points, 12 rebounds and three blocks against Indiana. He was held to six points on 1-of-10 shooting from the field in the National Championship game against Kansas in New Orleans but contributed 16 rebounds, six blocks, five assists and three steals. Davis was named the AP Player of the Year among his many awards. The forward declared for the 2012 NBA Draft after one season under coach John Calipari and was chosen with the first overall pick by the New Orleans Pelicans.