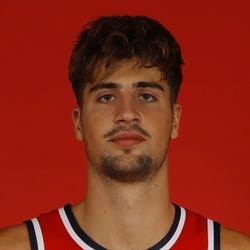 GTD
Injury Groin
Est. Return 10/19/2022
2021 Stats
PTS
8.4
REB
5.2
AST
2.0
STL
0.7
BLK
0.5
2022 Projections
PTS
REB
AST
STL
BLK
Unlock Our Projections
2022 Fantasy Outlook
Avdija slotted in as a key bench piece for the Wizards for a second straight season in 2021-22 and saw a slight expansion of his playing time to 24.2 minutes per contest. He also increased his shot volume and efficiency across the board. Avdija's most notable jump in efficiency came at the free-throw line, where he knocked down his shots at a 75.7 percent clip compared to just 64.4 percent as a rookie. That improvement, combined with an increase from 0.8 to 1.7 free-throw attempts per contest, aided his bump from 6.3 points per game as a rookie in 2020-21 to 8.4 per game last year. That said, except for Kentavious Caldwell-Pope, the Wizards return all of their biggest contributors from last season and added Johnny Davis with the 10th overall pick in the 2022 NBA Draft. Avdija presents fairly vanilla production across the board but shouldn't hurt managers in any particular area. Still, his mediocre production likely makes him a viable fantasy option primarily in deeper formats. Read Past Outlooks
read more
Height 6'9"
Weight 210
DOB 1/3/2001
College Israel
Drafted 1st Rd, #9 in 2020
$Signed a two-year, $9.16 million contract with the Wizards in December of 2020. Wizards exercised $4.92 million team option for 2022-23 in October of 2021. Contract includes $6.26 million team option for 2023-24.
Personal Bio/PreCareer Summary

Avdija was born Jan. 3, 2001 in Beit Zera, Israel. His father, Zufer, was a professional basketball player. His mother, Sharon, was also a basketball player, plus a track and field athlete. Avdija holds dual citizenship between Israel and Sebia -- his father is a Serbian citizen. Avdija originally played soccer, but focused on basketball in the fourth grade. From 2017 to 2019, Avdija led the Maccabi Tel Aviv hoops squad to three consecutive Israeli youth state championships. In August 2018 in Belgrade, he participated in Basketball Without Borders Europe, where he earned camp MVP honors. After three seasons on Israel's junior national team, Avdija joined the senior team in February of 2019. When Avdija turned 18, he received a deferment from mandatory military service in Israel due to his basketball career. However, he was drafted into a short service program in April of 2020 due to the COVID-19 pandemic suspending basketball. Avdija began his professional career in Israel with Maccabi FOX Tel Aviv in 2017-18, though appeared in just three games that season. The following year, he fluctuated between the main club and the Junior Team, averaging 6.1 points, 3.0 rebounds and 1.4 assists in 12.5 minutes. That season (2018-19), he was voted to the Munich Tournament (ANGT) All-Tournament Team and the NIJT All-Tournament Team. Avdija's role expanded the following season, as he started 26 of 59 appearances, averaging 9.0 points, 4.7 rebounds and 2.0 assists in 21.7 minutes. As a result of his excellent play, he was given the Israeli BSL MVP. Avdija's best performance that season was June 21 in a win over Maccabi Ashdod, where he recorded 23 points (7-9 FG, 2-3 3Pt, 7-8 FT), seven rebounds, five assists, one steal and one block in just 24 minutes.

FWashington Wizards
See All NBA Rumors
Past Fantasy Outlooks
2021
2020
In Avdija's rookie season with the Wizards, the forward showcased his potential as an effective rebounder and three-point specialist. The 20-year-old started in 32 games and averaged 6.3 points, 4.9 rebounds, 1.2 assists and 0.6 steals in 23.3 minutes. Avdija managed to make 41.7 percent from the field and 31.5 percent from beyond the three-point arc while he struggled to find consistency from three-point range. An ankle fracture late in the season forced the forward to miss the team's final 21 games. This upcoming season, Avdija will face an uphill battle for playing time, as the Wizards acquired depth at the wing. Kyle Kuzma and Corey Kispert will compete to take minutes away from Advija, while Davis Bertans will also be in the mix.
Avdija has sneaky upside that could eventually make him an impactful scorer in the league. The forward can put the ball on the ground and attack the rim with force while also playing the pick-and-roll game and knocking down a three. Avdija averaged 9.0 points, 4.7 rebounds and 2.0 assists while shooting 33.3 percent from three in Europe. To begin the 2020-21 campaign, Avdija could find himself in the starting lineup at small forward, though he'll have to beat out Troy Brown and Isaac Bonga in training camp. Still, Avdija likely needs more time to develop into a legitimate impact player, so he projects as a bit of a flier in deeper leagues for the time being.
More Fantasy News