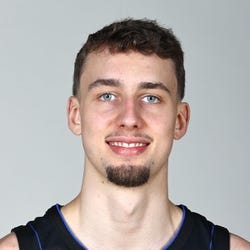 2022 Stats
PTS
19.6
REB
4.3
AST
4.3
STL
0.8
BLK
0.3
ROS Projections
PTS
REB
AST
STL
BLK
Unlock Our Projections
2022 Fantasy Outlook
The eighth overall pick in 2021, Wagner had a successful season with the Magic that earned him All-Rookie First Team honors. He started all 79 appearances and averaged 15.2 points on 47/35/86 shooting, 4.5 rebounds and 2.9 assists in 30.7 minutes. He posted some big efforts along the way, most notably his performance against the Bucks on Dec. 28, when the forward posted a career-high 38 points (12-20 FG, 4-8 3Pt, 10-10 FT), seven rebounds, three assists, a steal and a block. He posted other highs of 11 rebounds, 10 assists, six steals, five three-point makes and two blocks - demonstrating a well-rounded skillset. He was also effective off the ball as a cutter and corner three-point shooter, hitting 44 percent of his 66 three-point attempts from that area. Wagner should start at forward again this season, though there will be more competition for touches. Markelle Fultz will be back in the fold, and the Magic selected Paolo Banchero with the No. 1 pick in the 2022 Draft. Banchero is also a forward, and he, like Wagner, is a capable playmaker with the ball in his hands. But the assumption should be that the organization will prioritize Banchero's development and touches over Wagner's. Wagner will still play a significant role in the offense, but fantasy managers shouldn't expect a huge leap out of him in his second year despite the promising rookie campaign. Last year, Wagner ranked 103rd in per-game fantasy production and he should be drafted earlier than that this season, but there are plenty of players with higher upside. Read Past Outlooks
read more
Height 6'10"
Weight 220
DOB 8/27/2001
College Michigan
Drafted 1st Rd, #8 in 2021
$Signed a two-year, $10.27 million contract with the Magic in August of 2021. Magic exercised $5.51 million team option for 2023-24 in October of 2022. Contract includes $7.01 million team option for 2024-25.
Personal Bio/PreCareer Summary

Franz Jacob Wagner was born in August 2001 in Berlin, Germany. He is the son of Beate Wagner and Axel Schulz. Wagner joined Germany's Alba Berlin side in 2018 and won the BBL Best Young Player Award. He committed to play for the University of Michigan, where his older brother, Moritz, played. The forward averaged 11.6 points, 5.6 rebounds and 1.3 steals across 27 games during his 2019-20 NCAA season. He was named to the 2020 Big Ten All-Freshman team. Wagner improved during his sophomore campaign by averaging 12.5 points, 6.6 rebounds and 3.0 assists across 28 games during the 2020-21 NCAA season. He was an integral member of a Wolverines team that advanced into the NCAA Tournament's Elite Eight. Wagner was named to the 2021 All-Big 10 second team by coaches and All-Big 10 third team by media members. He declared for the 2021 NBA Draft after two seasons at Michigan. Wagner was selected eighth overall by the Orlando Magic.

FOrlando Magic
See All NBA Rumors
2021 Fantasy Outlook
One of the more unique players in the class, Wagner's length and intangibles are the primary traits that made him a top-10 pick. Wagner averaged a well-rounded 12.5 points, 6.5 rebounds, 3.0 assists, 1.3 steals and 1.0 block as a sophomore at Michigan last season. He's far from a traditional playmaker, but Wagner's passing is well-above-average for his age and size. He also profiles as a potentially elite defender capable of shadowing opposing big men and sticking with guards at the rim. Wagner will have more competition for playing time than fellow-rookie Jalen Suggs - including from his older brother, Moritz - but if the minutes are there, he could be one of the most well-rounded rookies in the class. Still, Wagner is probably a year away from warranting draft consideration in standard formats.
More Fantasy News