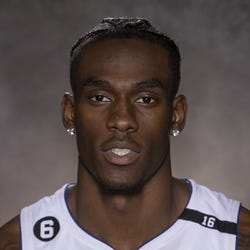 2022 Stats
PTS
6.5
REB
6.7
AST
0.6
STL
0.6
BLK
0.9
ROS Projections
PTS
REB
AST
STL
BLK
Unlock Our Projections
2022 Fantasy Outlook
The Pistons selected Duren with the 13th overall pick in the 2022 NBA Draft following his lone season at Memphis, where the 6-foot-11 big averaged 12.0 points on 59.7 percent shooting, 8.1 rebounds (3.0 offensive), 2.1 blocks, 1.3 assists and 0.8 steals in 25.2 minutes. He was named AAC Freshman of the Year and to the All-AAC First Team. He finished with a successful Summer League venture, averaging 11.3 points on 65.0 percent shooting to go along with 3.3 rebounds, 2.0 assists and 1.0 assists. The 18-year-old is an excellent athlete known for his shot-blocking and interior scoring, the latter of which should prove especially useful in an offense with a capable lob-thrower in Cade Cunningham. The catch is that he is prone to mental lapses, such as missing box-outs and getting into foul trouble. His post game is also weak and his free-throw percentage (62.5%) is relatively poor, but these criticisms are common for most big men who end up in the late lottery. Duren is competing against Isaiah Stewart, Marvin Bagley and Nerlens Noel for minutes. Stewart had an underwhelming sophomore campaign and is undersized while Noel is a veteran (28 years old) and doesn't have any development upside for Detroit, so there's a path, in theory, for Duren to make an impact. However, early reports indicate Duren may spend significant time in the G League. If that's the case, he can't be drafted in standard leagues. Read Past Outlooks
read more
Height 6'11"
Weight 250
DOB 11/18/2003
College Memphis
Drafted 1st Rd, #13 in 2022
$Signed two-year, $8.45 million contract with the Pistons in July of 2022. Contract includes $4.54 million team option for 2024-25.
Personal Bio/PreCareer Summary

Jalen Montez Duren was born on November 18, 2003 in New Castle, Delaware. Duren grew up in Sharon Hill, PA, where he played football and baseball as a child before opting to focus on basketball. Before he reached high school, Duren already stood 6-foot-8 and attracted attention from top schools with notable performances at the MADE Hoops Middle School Academy and the CP3 Rising Stars Camp. The big man began his high school career at Roman Catholic High School in Philadelphia. He averaged 12.8 points, 9.3 rebounds and 2.5 blocks per game as a freshman en route to First Team All-League and Second Team All-State honors. During his sophomore season, Duren posted 18.1 points, 12.5 rebounds and 3.4 blocks per game. In the summer of 2019, Duren was selected to play for USA Basketball's 16U team at the FIBA Americas Championship, where he helped Team USA capture the gold medal. For his junior and senior campaigns, Duren opted to transfer to Montverde Academy in Montverde, FL. Duren helped Montverde reach the 2021 High School Nationals behind averages of 14.5 points and 9.3 rebounds per contest. A consensus five-star recruit, Duren committed to Memphis over Kentucky, Miami, the NBL (Australia) and the NBA G League Ignite. As a freshman at Memphis, Duren averaged 12.0 points, 8.1 boards, 1.3 assists and 2.1 blocks, while shooting nearly 60 percent from the field. He began his college career by blocking at least one shot in 16 straight games. Against UCF on March 11, 2022, Duren produced 21 points and 10 rebounds. At the end of the season, Duren was named the AAC Freshman of the Year and a First Team All-AAC performer. He also declared for the 2022 NBA Draft, where he was drafted 13th overall by the Hornets, but immediately traded to the Detroit Pistons in a 3-team deal.