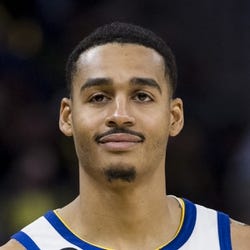 2022 Stats
PTS
20.5
REB
2.8
AST
4.3
STL
0.9
BLK
0.2
ROS Projections
PTS
REB
AST
STL
BLK
Unlock Our Projections
2022 Fantasy Outlook
Playing guard on a team that already features Stephen Curry and Klay Thompson doesn't seem like the best opportunity for a young player to carve out a career-changing campaign, but Poole did just that last season, making a massive impact on the Warriors' path to an NBA title and emerging as one of the league's most dynamic rising stars. The 2019 first-round pick showed some promise in his first two NBA campaigns, but he didn't put it all together until last year, when he finished with per-game averages of 18.5 points, 4.0 assists, 3.4 rebounds and 2.8 three-pointers while shooting 44.8 percent from the field and 92.5 percent from the charity stripe. Much of Poole's work was done as a starter. He began the campaign in the starting five as Thompson rehabbed his Achilles injury, and he filled in for Curry when the point guard missed nearly a month due to a foot injury late in the season. Poole was especially effective during the latter stretch, averaging 25.8 points, 6.2 dimes, 5.0 boards and 4.1 triples during Curry's 12-game absence. Golden State will, of course, hope that both Curry and Thompson can remain healthy next season, likely resulting in Poole playing primarily off the bench. The 23-year-old performed well as a reserve last season, but it's logical to expect that such a role will result in a dent in his overall production. It may be tempting to grab Poole in the middle rounds of fantasy drafts based on his sustained periods of brilliance last season, but be wary of overlooking the fact that his opportunities may not be as favorable if the Warriors' superstars maintain good health. Read Past Outlooks
read more
Height 6'4"
Weight 194
DOB 6/19/1999
College Michigan
Drafted 1st Rd, #28 in 2019
$Signed a four-year, $140 million contract extension with the Warriors in October of 2022.
Personal Bio/PreCareer Summary

Jordan Anthony Poole was born in Milwaukee, Wisconsin, to Monet and Anthony Poole in 1999. He has one brother and one sister. Poole attended Rufus King High School in Milwaukee, Wisconsin, before transferring to play his senior season for La Lumiere School in La Porte, Indiana. He was a 2016 first team All-Wisconsin selection as a junior and helped guide La Lumiere to the 2017 Dick's National High School Championship as a senior. In the Dick's National Championship game, Poole tallied 13 points, three rebounds, four assists and three steals. He loves cats and volunteers at animal shelters in his free time. Learn more about Poole by following him on Instagram (@jordan_poole). Not many college basketball players can be remembered for one spectacular shot. However, Poole is an exception. The Wolverine guard hit a buzzer-beating three-pointer in the second round of the 2018 NCAA Tournament. The 6-foot-5 guard had not played extensively during his first season with Michigan and provided just 6.1 points and 1.4 rebounds in 12.5 minutes per contest. He did not start any games but helped the team make the NCAA Tournament final. As a sophomore, Poole moved into the starting lineup and averaged 12.8 points and 3.0 rebounds. He started the season slowly but scored 20 or more points in four games. While the 2019 NCAA Tournament did not feature Poole's heroics, he scored 19 points in a win over Florida. After the tournament, Poole declared his intention to apply for the 2019 NBA Draft. Poole was drafted 28th overall by the Golden State Warriors.

GGolden State Warriors
See All NBA Rumors
Past Fantasy Outlooks
2021
2019
Despite seeing his playing time drop by three minutes per game, Poole increased his scoring output from 8.8 to 12.0 points per contest in his second NBA campaign. The increase was largely due to a substantial jump in shooting efficiency. After making only a third of his field-goal attempts as a rookie, Poole converted a much more acceptable 43.2 of his shot attempts last season, including a respectable 35.1 percent of his three-point tries. There is even more to like about the 22-year-old's campaign if you discount his first 15 games, during which he registered under 10 minutes per contest. Poole spent all of February in the G League, but after returning in early March, he registered per-game averages of 14.7 points, 2.4 assists, 2.1 rebounds and 2.3 three-pointers over the team's final 36 regular-season contests. The 6-foot-4 guard isn't going to challenge Stephen Curry for a starting job anytime soon, but he grew into a prominent reserve role during his sophomore campaign and could easily see minutes in the mid-to-high 20s next season. His lack of a well-rounded skillset hurts his value in fantasy, but his ability to score and knock down treys should at least make him a consideration in the late rounds of deep leagues. If nothing else, he'll likely be a hot pickup if Curry is forced to miss any time during the regular season.
Golden State's first-round selection at No. 28, Poole saw a huge jump in playing time from his freshman to sophomore season at Michigan. Last year, he started in all 37 games for the Wolverines, averaging 12.8 points, 3.0 rebounds, 2.2 assists and 1.1 steals across 33.1 minutes per contest. He shot 37.0 percent from three in his two collegiate seasons, which was a likely big reason Golden State had such a high interest in him. Poole struggled with turnovers, and he will need to clean that up to secure a regular spot in the rotation. Even with Klay Thompson likely out until the All-Star Break, Poole will face stiff competition on the wing from Alec Burks and D'Angelo Russell, likely limiting him to a minimal role in the rotation as a three-point specialist off the bench. He can be avoided in standard formats for his rookie campaign.
More Fantasy News