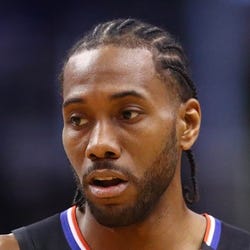 GTD
Injury Ankle
Est. Return 12/5/2022
2022 Stats
PTS
10.0
REB
4.0
AST
3.4
STL
0.6
BLK
0.2
ROS Projections
PTS
REB
AST
STL
BLK
Unlock Our Projections
2022 Fantasy Outlook
After tearing his ACL late in the 2020-21 campaign, Leonard was given an initial return timetable for February 2021, but he never saw the floor last season. The cautious approach is understandable, given Leonard's extensive injury history. He's appeared in 70-plus games just twice in his decade-long career, and he's topped out at 60 games since leaving San Antonio for the 2018-19 season with Toronto, where he won an NBA title. In addition to the Clippers' staff, fantasy managers should also exercise caution with Leonard. The veteran playing more than 60 games would be considered a win, which makes him a tough player to roster. He'll presumably be sitting out plenty of back-to-back sets, which sets him up for significant missed time before the possibility of injury is considered. When available, he's productive -- there's no question about that. He's finished as a top-10 fantasy asset on a per-game basis in six consecutive seasons (discounting 2017-18 when he played nine games and last year when he didn't play at all). The two-time Finals MVP is one of the best two-way players in the NBA, and during his 109 appearances with LA, he's averaged 26.0 points on 49/39/89 shooting, 6.8 rebounds, 5.0 assists, 1.7 steals and 0.5 blocks. Drafting Leonard is a massive risk/reward game, but he shouldn't make it past the third round, given his talent. Read Past Outlooks
read more
Height 6'7"
Weight 225
DOB 6/29/1991
College San Diego State
Drafted 1st Rd, #15 in 2011
$Signed a three-year, $127.48 million contract with the Clippers in August of 2021. Contract includes $48.79 million player option for 2024-25.
Personal Bio/PreCareer Summary

Kawhi Anthony Leonard was born in Los Angeles, California, to Mark Leonard and Kim Robertson. He has four older sisters. One of his cousins, Stevie Johnson, played in the National Football League for the Buffalo Bills, San Francisco 49ers and San Diego Chargers. Leonard attended Canyon Springs High School in Moreno Valley, California, but transferred to Martin Luther King High School in Riverside, California, for his junior year. In his senior season, Leonard averaged 22.6 points, 13.1 rebounds, 3.9 assists and 3.0 blocks per game and was named California Mr. Basketball while leading his team to a 30-3 record. Leonard donated the car he received along with 2014-15 NBA Defensive Player of the Year award to Respite Care, a center providing aid for children in need. In 2019, he teamed with the L.A. Clippers Foundation and non-profit community partner Baby2Baby to contribute a gift of one million backpacks intended to reduce stress on low-income families headed back to school across Southern California. He has also hosted a skills camp in California. Learn more about Leonard by following him on Twitter (@kawhileonard). Leonard joined San Diego State to play for coach Steve Fisher after growing up near Los Angeles. The 6-foot-7 forward made his presence known by owning the boards as a freshman. He led the Aztecs with 12.7 points and 9.9 rebounds to help the team win the Mountain West Conference's autobid for the NCAA Tournament. Leonard had 12 points and 10 rebounds in the team's first-round loss to Tennessee. He garnered MWC Freshman of the Year, All-MWC First Team and tournament MVP honors. In his sophomore season, Leonard paced the Aztecs to 19 straight wins before they lost to BYU. The forward had double-doubles in his first five games and finished with 23 on the season. Leonard averaged 15.5 points and 10.6 rebounds but connected on just 29.1 percent of his three-point attempts. The Aztecs advanced to the Sweet 16 as the forward averaged 16.3 points and 9.3 rebounds in the Big Dance. He declared for the 2011 NBA Draft after two seasons in college and was selected by the Indiana Pacers with the 15th overall pick, but he was traded to the San Antonio Spurs on draft night.