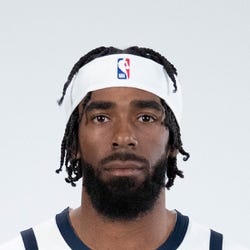 2022 Stats
PTS
10.7
REB
2.5
AST
7.6
STL
1.0
BLK
0.2
ROS Projections
PTS
REB
AST
STL
BLK
Unlock Our Projections
2022 Fantasy Outlook
The Jazz are shifting into a rebuild, trading Rudy Gobert and Donovan Mitchell over the summer. As of right now, Conley is the starting point guard, but he's presumably on the trade block as well, and it would be surprising if he was on the team to start the year. As a result, it's hard to project what's in store for the veteran. Last year, he appeared in 72 games and ranked 76th in per-game fantasy production behind 13.7 points, 5.3 assists, 3.0 rebounds and 1.3 steals in 28.6 minutes. Read Past Outlooks
read more
Height 6'1"
Weight 175
DOB 10/11/1987
College Ohio State
Drafted 1st Rd, #4 in 2007
$Signed a three-year, $68.04 million contract extension with the Jazz in August of 2021.
Personal Bio/PreCareer Summary

Mike Conley Jr., son of Rene and Mike Conley Sr., was born in Fayetteville, Arkansas in 1987. Mike Sr. won the gold medal in the triple jump at the 1992 Olympic Games and took silver in the Games of 1984. He won nine NCAA individual titles at the University of Arkansas and was inducted into the USA Track and Field Hall of Fame in 2004. Conley Jr.'s youth basketball career was spent alongside fellow 2007 NBA Draftee Greg Oden, as the pair met in middle school playing AAU ball. They joined forces at Lawrence North high school in Indianapolis, winning a whopping 103 games and three state championships, losing just seven times. They won their final 45 games at Lawrence North, and the pair moved on to Ohio State, where they each spent one year. That season, the Buckeyes won 35 games, advancing to the National Championship game. Conley helped lead them to success, dishing out a program-record 238 assists. Conley is also an avid bowler and hosts an annual Bowl-N-Bash to benefit the Special Olympics and Memphis Police Sports Federation. You can follow him on Twitter (@MCONLEY10) and Instagram (@Mac10). Conley was named to both the All-Big Ten first team, as well as the conference's All-Freshman squad, in his first and only season at Ohio State. The Indianapolis native helped lead the Buckeyes to the Big Ten regular-season title, and he led the conference in both assists (238) and steals (87). He wasn't done there, however. Conley also helped the Buckeyes take home the Big Ten Tournament championship and was pegged for the All-Big Ten Tournament first team along the way. He enjoyed additional postseason success by helping Ohio State to the 2007 NCAA Tournament final before losing to Florida. He was named to the NCAA All-Tournament team and the All-Region team. Conley declared for the 2007 NBA Draft and was selected fourth overall.