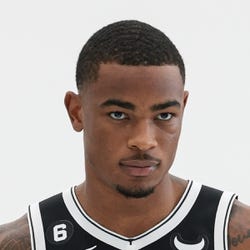 2022 Stats
PTS
11.8
REB
8.8
AST
1.3
STL
0.7
BLK
2.2
ROS Projections
PTS
REB
AST
STL
BLK
Unlock Our Projections
2022 Fantasy Outlook
Claxton has been a name to watch for the past two seasons. Claxton flashed his upside on both ends of the floor again last year. He ended with averages of 8.7 points, 5.6 rebounds, 1.1 blocks and 0.5 steals in just under 21 minutes per game. Projecting forward, it would appear as though the time is now for Claxton, especially given that he has little competition for minutes. The only other center on the roster is Day'Ron Sharpe, but he's undersized and spent significant time in the G League last year as a rookie. It's also possible Ben Simmons spends some time at center. In general, things look good for Claxton to have a career-best season, and for anyone drafting early, he is a viable top-100 target. Read Past Outlooks
read more
Height 6'11"
Weight 225
DOB 4/17/1999
College Georgia
Drafted 2nd Rd, #1 in 2019
$Signed a two-year, $17.25 million contract with the Nets in July of 2022.
Personal Bio/PreCareer Summary

Nicolas Devir Claxton was born in 1999 in Greenville, South Carolina. He is the son of University of Georgia alums Charles and Nicole Claxton. Nicolas also attended Georgia for two years. Like his son, Charles played collegiate ball for the Bulldogs, earning both freshman All-SEC honors. He also briefly played for the Boston Celtics during the 1995-96 season. Before attending Georgia, Nicolas Claxton was a high school student at the Legacy Charter School in Greenville. Claxton was the fourth player in Legacy history to score more than 1,000 career points (1,163). He has also represented the U.S. Virgin Islands in various international competitions and was eligible to do so because his father was born in St. Thomas. Claxton's nickname is "Clax". Fans can follow the 6-foot-11 Bulldog product on Twitter at @_claxton33 and on Instagram @nicolasclaxton. Claxton got his feet wet in international basketball competition as a teenager when he played for the United Stated Virgin Islands team. He averaged 10.6 points and 11.8 rebounds in the Centrobasket Under-15 Championship in 2014. Two years later, he helped the Virgin Islands place seventh in the FIBA Americas Under-18 Championship by averaged 12.0 points and 7.2 rebounds. The 6-8 forward chose Georgia over Baylor and South Carolina (where he played high school basketball). He started just five games a freshman, but developed into a star as a sophomore. During the 2018-19 season, he led the Bulldogs with 13.0 points, 8.6 rebounds and 2.5 blocks and started in all of Georgia's 32 games. The lanky forward collected eight double-doubles and led Georgia in scoring, rebounding, blocks and steals. He helped Georgia knock off rival Georgia Tech in December with 13 points, 13 rebounds, six assists and six blocks. Claxton was named to the 2019 All-SEC Second Team and became the 36th Georgia player to become an NBA Draft pick.

CBrooklyn Nets
See All NBA Rumors
2019 Fantasy Outlook
Claxton was selected by the Nets with the first pick in the second round of the 2019 Draft. The 6-foot-11, 215-pound center spent two seasons at Georgia. Last year, he earned Second Team All-SEC (Coaches) honors, averaging 13.0 points (46.0 FG%, 28.1 3P%, 64.1 FT%), 8.6 rebounds, 2.5 blocks, 1.8 assists and 1.1 steals across 31.6 minutes. Appearing in four summer league contests, Claxton posted 5.5 points and 4.8 rebounds in 15.8 minutes per game. Claxton has clear upside as a defender, and it's possible he develops an outside shot. However, he was just 26-for-86 (30.2 percent) from deep in his 65 college appearances and hit only 61.1 percent of his 257 free-throws. With Brooklyn, Claxton is firmly behind the likes of DeAndre Jordan and Jarrett Allen in the center rotation, and the rookie will probably only see real action if there is an injury.
More Fantasy News