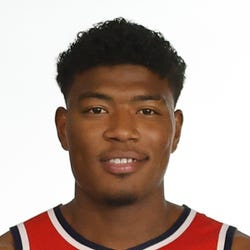 Out
Injury Ankle
Est. Return 12/9/2022
2022 Stats
PTS
11.6
REB
4.8
AST
1.1
STL
0.3
BLK
0.5
ROS Projections
PTS
REB
AST
STL
BLK
Unlock Our Projections
2022 Fantasy Outlook
Hachimura's production took a step back in Year 3 after two promising campaigns to start his career, but he did increase his efficiency as a shooter, connecting on 49.1 percent of his field-goal attempts and 44.7 percent of his three-pointers -- both career highs. The forward had a slow start to the campaign as he didn't join the team until late November due to personal reasons and then was sidelined due to conditioning issues for a month before ultimately landing in COVID-19 protocols at the end of December. He eventually cleared protocols and made his season debut Jan. 9 against the Magic but found himself in a log jam at power forward with newcomers Kyle Kuzma, Montrezl Harrell and, eventually, Kristaps Porzingis. However, with Kyle Kuzma sidelined due to knee tendonitis, Hachimura started the final 13 games of the season and showed off his potential by posting 14.2 points and 5.1 rebounds across 28.6 minutes per game. He'll again face strong competition for playing time after the acquisition of Will Barton, but his size and skill should still allow him to carve out a substantial bench role. Read Past Outlooks
read more
Height 6'8"
Weight 230
DOB 2/8/1998
College Gonzaga
Drafted 1st Rd, #9 in 2019
$Signed a two-year, $9.16 million contract with the Wizards in July of 2019. Wizards exercised $4.91 million team option for 2021-22 in December of 2020. Wizards exercised $6.26 million team option for 2022-23 in October of 2021.
Personal Bio/PreCareer Summary

Rui Hachimura was born in 1998 in Toyama, Japan. His the first Japanese-born player to be selected in the first round of the NBA Draft (2019) and was only the fifth Japanese-born male to play NCAA Division I college basketbal. Rui's mother, Makiko, is of Japanese decent and his father, Zakari Jabil, is Beninese. Rui has three younger siblings. The name "Rui" means "base" or "fortress" in Japanese and was given to the forward by his grandfather. Hachimura caught the attention of the basketball world via a breakout performance at the FIBA U17 World Championships in Dubai in August 2014, where he averaged a tournament-best 22.1 points per game. Hachimura also led Meisei High School to a second straight winter All-Japan High School Tournament title, averaging 28.0 points in five games. The 6-foot-8 forward appeared in three games for Team Japan during the 2019 FIBA Basketball World Cup and averaged 13.3 points, 5.7 rebounds and 2.3 assists per FIBA contest. Check him out on Twitter (@rui_8mura). Hachimura honed his basketball skills as a teenager in his native Japan, leading Meisei High School to multiple championships and shining in the 2014 FIBA Under-17 World Championship before heading to the United States to attend Gonzaga. The 6-foot-8 forward didn't see the court much during his freshman season with the Bulldogs, as he averaged only 4.6 minutes per game in 28 contests. His role expanded as a sophomore, however, resulting in an uptick in playing time to 20.7 minutes per game in 37 contests, including two starts. Hachimura turned many heads with his performance during that 2017-18 season, averaging 11.6 points on 56.8 percent shooting from the field while grabbing 4.7 rebounds. His strong play earned Hachimura a starting role during the 2018-19 campaign, and the talented junior responded by bursting onto the national scene as one of the top offensive players in the country. In his final season with the Bulldogs, Hachimura raised his scoring average to 19.7 points and pulled down 6.5 boards. His shooting remained elite, as he posted a 59.1 field goal percentage and added a new wrinkle to his game by drilling 41.7 percent of his three-point attempts. Hachimura's excellence resulted in a slew of honors, including a spot on the Wooden Award All-American Team, the Julius Erving Small Forward of the Year Award and the WCC Player of the Year Award.

FWashington Wizards
See All NBA Rumors
Past Fantasy Outlooks
2021
2020
2019
In Hachimura's second season with the Wizards, the forward saw a similar role to his rookie season. He notched similar averages of 13.8 points, 5.5 rebounds and 1.4 assists. Last season, the 23-year-old recorded 26 games where he managed 15 or more points and he even improved his three-point shooting percentage by almost five percent (32.8). Hachimura didn't face much competition for minutes during the 2019-20 season, but he is expected to this upcoming season as the Wizards have a lot more depth in the frontcourt. The former Gonzaga star will battle with Davis Bertans, Kyle Kuzma and Deni Avdija for playing time. With Russell Westbrook now a Laker, the Wizards will need role players like Hachimura to step up and score more on any given night. It's likely Hachimura will start every game again like last season, but he could end up seeing fewer minutes, and his numbers may drop. There is plenty of upside in taking a young forward who can break out in any game, but the risks of him losing his starting role and seeing less production could result in Hachimura getting drafted in the final few rounds of fantasy drafts.
After a strong collegiate career at Gonzaga, Hachimura earned a lottery selection and took on an immediate starting role with a heavily-depleted Washington team. In his first season, the forward averaged 13.5 points, 6.1 rebounds and 1.8 assists while posting 46.6/28.7/82.9 shooting splits. He averaged 30.1 minutes per contest and started every game he played. Hachimura notched three double-doubles and one 30-point performance and was selected to the All-Rookie second team. He shared time in the frontcourt with Davis Bertans, who is back with the team after re-signing. John Wall, who has been out for the past two seasons with an Achilles injury, is on track to make his return in 2020-21 and figures to be involved heavily in the offense immediately. Hachimura got plenty of run and usage thanks to the dearth of playmakers available, but with Wall returning, it wouldn't be surprising if Hachimura's numbers remained somewhat stagnant.
Hachimura was selected with the ninth overall pick in the 2019 draft, and he figures to be the Wizards' starting power forward immediately. He averaged 19.7 points, 6.5 rebounds and 1.5 assists as a junior with Gonzaga, winning the WCC Player of the Year award behind his strong play. He's a serviceable defender (1.6 combined blocks/steals in 2018-19) and shooter (57.9 FG percentage in collegiate career). Though he shot 41.7 percent from three last season, it was his first year shooting better than 28.6 percent from beyond the arc. The long range game is not his specialty, but Hachimura can step out and get a bucket at times. With a dearth of playmakers in Washington, Hachimura's natural scoring and rebounding abilities should afford him a fairly high fantasy ceiling, especially considering he'll probably see minutes in the mid-to-upper 20s. He's a late-round pick in standard formats who could surpass his current ADP.
More Fantasy News