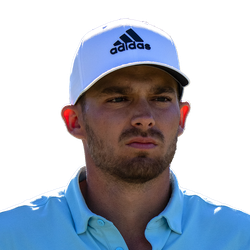 2021–22 Stats
Rank
13
Winnings
$3,454,522
Winnings/Entry
$143,938
Entries
24
Rounds
86
2022–23 Fantasy Outlook
Wise was just 22 years old when he picked up his first PGA Tour win in his rookie season of 2017-2018. What happened in the following two seasons then, was hard to explain as Wise's game completely left him. Perhaps complacency set in, perhaps it was something else, but whatever the case, he did resemble the young man that won over $3 million in his first season on the PGA Tour. Things started to click for Wise again during the 2020-2021 season as he found his way above $2 million in earnings. He built upon that this past season with what was his most consistent season yet on the PGA Tour. Wise has won on the PGA Tour before and now that he's got the consistency as well, he could be a force in the coming years. Read Past Outlooks
read more
Handedness Right
Status Pro
Height 6'1"
Weight 175 lbs
DOB 6/21/1996
Birthplace Cape Town, South Africa
College Oregon
Country USA
Read More News
PGA Stats
Loading Golf Stats...
Tournament Results
Scoring
FanDuel
DraftKings
Loading Tournament Log...
PGA Advanced Stats
Loading Advanced Stats...
Recent RotoWire Articles Featuring Aaron Wise
2022-23 Golf Draft Kit: Rankings & Profiles
18 days ago
18 days ago
RotoWire's golf writers run down their rankings for the 2022-23 season, and you won't have to look far down the list to find Rory McIlroy.
2022-23 Golf Draft Kit: Projected Earnings
18 days ago
18 days ago
Scottie Scheffler ended last season atop the Official Money list, and RotoWire's golf staff expects him to make another run at the top spot during the upcoming campaign.
Weekly Recap: More Glory For Rory
28 days ago
28 days ago
Thanks to a stellar Sunday showing, Rory McIlroy took down the top-ranked player in the world and won the TOUR Championship for a record third time.
FanDuel PGA: TOUR Championship Picks and Strategy
34 days ago
34 days ago
Joaquin Niemann has quietly been racking up quality results, and that lands him a spot on Ryan Andrade's list of golfers to go after in the last FanDuel contests of the season.
DraftKings PGA: TOUR Championship Picks and Strategy
34 days ago
34 days ago
Scottie Scheffler will not come cheap, but Len Hochberg still suggests locking him into your lineups for the final DraftKings contests of the 2021-22 season.
Past Fantasy Outlooks
2022
2020
2019
2018
2017
Wise had a bit of an up-and-down season in 2020-21. His ball-striking was strong, finishing top-35 in SG: tee-to-green, but the putter ranked outside the top 185 on tour. That makes three consecutive years in which Wise has lost strokes with the flat stick. The positive is that Wise did bounce back from a terrible season in 2019-20 that saw him make just six of 18 cuts. At 25, there is still plenty of upside with how solid he strikes the ball.
Wise found the winners circle and posted 10 top-25s in his rookie season back in 2017-18, but things were not as easy this season. The Oregon product missed six cuts in 18 starts and only had two top-25s. Wise did finish the season fourth in GIR percentage, but was way down at 182nd in SG: Putting. At 24, there is still hope he can turn things around soon.
Wise came onto the PGA Tour guns a blazin' last season as he picked up a win and a runner-up on his way to over $3.4 million in earnings. Wise certainly looked the part of the "next big thing", but his follow-up season left a lot to be desired. It's not unheard of for a golfer to have a strong rookie season and then fall into a slump the following year, so there's no reason to panic here. In fact, there's opportunity for salary cap purposes and Wise's earnings number is more than reasonable for the upcoming season.
Wise wasn't among the top of his Web.com Tour class prior to his entrance to PGA Tour, so expectations weren't exactly high for him, and there was nothing on the course that Wise did early last season to catch much attention, but that changed at the Wells Fargo Championship in May. Wise finished runner-up at the Wells Fargo and in case anyone thought that effort was a fluke, he put all questions to bed the following week when he won the At&T Byron Nelson. He did miss five cuts directly following that win, but he recovered with a pair of top-10s later in the season. If Wise had a long track record of success, he might be in-play in salary cap formats this season, but since we only have one year to go no, he simply carries too much risk.
The former NCAA champion from the University of Oregon has already enjoyed several levels of success as a professional, securing both his first Web.com victory and PGA Tour top-10 during his 2016-2017 campaign. He first gained momentum with a T10 finish at the Shriners Hospitals for Children Open back in November, but the highlight of his summer came at the Air Capital Classic in June where he fired back-to-back 62s in his first two rounds and led wire-to-wire. Despite ranking just 72nd in terms of ball striking on the Web.com Tour, Wise could be in line for one of the more successful PGA Tour careers out of this year's class of rookies.
More Fantasy News