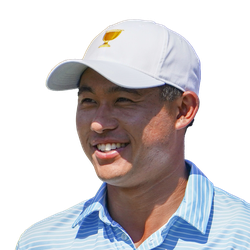 2021–22 Stats
Rank
21
Winnings
$4,837,271
Winnings/Entry
$254,593
Entries
19
Rounds
64
2022–23 Fantasy Outlook
Morikawa had a very strange 2021-22 season. He got off to a pretty incredible start with top-seven finishes in his first four events, but over his final 14 stroke play events he had just three top-20 finishes. Fortunately they happened to be the Masters, U.S. Open, and first playoff event. Still, that is a bit of a letdown after two straight seasons of winning multiple times including a major. Morikawa has never been a great putter, but has the ability to pop on certain weeks like the 2021 Open Championship. He ranked top-three in SG: Approach for the third straight season, but 152nd in SG: Around-the-Green is a clear area for improvement that could lead to more times in contention in 2022-23. Read Past Outlooks
read more
Handedness Right
Status Pro
Height 5'9"
Weight 170 lbs
DOB 2/6/1997
Birthplace ,
College California
Country USA
Read More News
PGA Stats
Loading Golf Stats...
Tournament Results
Scoring
FanDuel
DraftKings
Loading Tournament Log...
PGA Advanced Stats
Loading Advanced Stats...
Recent RotoWire Articles Featuring Collin Morikawa
Weekly Recap: Presidents Cup Appraisal
4 days ago
4 days ago
Len Hochberg looks back at the U.S. Team's latest victory over the International Team in the Presidents Cup and grades the 24 golfers that took part.
DraftKings PGA: Presidents Cup Picks and Strategy
10 days ago
10 days ago
Len Hochberg gives you the lowdown on this week's DraftKings contests and tells you why to train your eyes on Jordan Spieth.
FanDuel PGA: Fortinet Championship Picks and Strategy
17 days ago
17 days ago
Hideki Matsuyama has had a lot of success at Silverado, and Ryan Andrade recommends including him in your lineups for the first FanDuel contests of the new season.
DraftKings PGA: Fortinet Championship Picks and Strategy
17 days ago
17 days ago
Len Hochberg breaks down the DraftKings board for the first tournament of the new season and explains why it makes sense to lock defending champion Max Homa into your lineups.
2022-23 Golf Draft Kit: Rankings & Profiles
22 days ago
22 days ago
RotoWire's golf writers run down their rankings for the 2022-23 season, and you won't have to look far down the list to find Rory McIlroy.
Past Fantasy Outlooks
2022
2020
2019
Morikawa staked his claim as an elite-level PGA Tour pro when he won his second career major at the Open Championship in July, a win that followed his first WGC title just months earlier. Only a few years into his PGA Tour career, Morikawa has made quite the impression on the PGA Tour. There's no doubt that he's the real deal and he's clearly a first-round pick in drafts, but his salary is a bit too high for salary cap leagues this season.
The 23-year-old is an absolute star in the making. He was able to breakthrough on the big stage at the PGA Championship, putting together a closing stretch for the ages that will be remembered by his tee shot at the par-4 16th that set up an eagle. Morikawa's ball striking is already one of, if not the best on the PGA Tour right now. He lost strokes both around the greens and with the putter, showing that his potential is even higher in 2020-21.
Morikawa was one of a handful of golfers that turned pro in the middle of the season that had a lot of success. In fact, Morikawa was the most successful of that bunch as he not only picked-up his first win, but he also managed a runner-up and a T4 in just nine starts. His win did come at an opposite-field event, but his runner-up came at the 3M and there was plenty of fire power in that field. Morikawa has plenty of game and he'll continue to improve, but he might not be a great option in salary cap formats this season. It's one thing to have success during a short time span when there are no expectations. It's another when you are a full member and suddenly it's not just a handful of tournaments, it's a lifestyle.
More Fantasy News