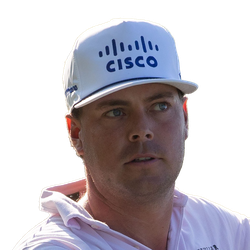 2021–22 Stats
Rank
38
Winnings
$3,068,341
Winnings/Entry
$118,013
Entries
26
Rounds
88
2022–23 Fantasy Outlook
When Mitchell won during his sophomore season on the PGA Tour in 2019, it appeared as though he was about to take off. That didn't happen however and he spent much of the following two season trying to recapture the magic. Although he failed to win this past season, he more than recaptured the magic as he posted a career highs in top-10s and top-25s on his way to a career best earnings number. Mitchell is not a straightforward case however as he's been quite erratic during his time on the PGA Tour. He's one of a handful of players with really high ceilings and really low floors. Since he's had just one sub-$1 million season out of five though, he's probably more likely to get better as the years go on instead of regressing. With that in mind, Mitchell deserves some consideration in salary cap leagues this season, even at this inflated price. Read Past Outlooks
read more
Handedness Right
Status Pro
Height 6'1"
Weight 185 lbs
DOB 1/7/1992
Birthplace ,
College Georgia
Country USA
Read More News
PGA Stats
Loading Golf Stats...
Tournament Results
Scoring
FanDuel
DraftKings
Loading Tournament Log...
PGA Advanced Stats
Loading Advanced Stats...
Recent RotoWire Articles Featuring Keith Mitchell
2022-23 Golf Draft Kit: Rankings & Profiles
23 days ago
23 days ago
RotoWire's golf writers run down their rankings for the 2022-23 season, and you won't have to look far down the list to find Rory McIlroy.
2022-23 Golf Draft Kit: Projected Earnings
23 days ago
23 days ago
Scottie Scheffler ended last season atop the Official Money list, and RotoWire's golf staff expects him to make another run at the top spot during the upcoming campaign.
FanDuel PGA: BMW Championship Picks and Strategy
46 days ago
46 days ago
There's a lot to like about Cameron Young this week, and Ryan Andrade recommends finding a spot for him in your FanDuel lineups.
DraftKings PGA: BMW Championship Picks and Strategy
46 days ago
46 days ago
This week's track sets up nicely for Viktor Hovland, and that helps him land a spot among Len Hochberg's picks to click in the latest contests on DraftKings.
DraftKings PGA: FedEx St. Jude Championship Picks and Strategy
53 days ago
53 days ago
Len Hochberg breaks down the DraftKings board for the playoff opener and explains why Collin Morikawa checks in at too good a price to pass up.
Past Fantasy Outlooks
2022
2020
2019
2018
2017
Mitchell was able to salvage what was mostly a disappointing campaign with a couple top-5s late in the season to make the FedEx Cup Playoffs. He continues to be one of the most dominant drivers on tour (ninth in strokes-gained off-the-tee this season) but the rest of his game leaves much to be desired. Mitchell's game certainly has upside, but unless he makes strides with his iron play, an inconsistent season is expected.
Mitchell had a break out 2019 season, but he failed to do much of anything this past season to back that up. Now the question is, was this past season simply a hangover from picking up his first win the year prior and having no pressure to retain his card? Considering Mitchell has two solid seasons under his belt vs. one poor season, a bounce-back would seem to be in order this year. At his current number, he deserves a lot of consideration in salary cap formats this season.
It took Mitchell some time to finally make it on the PGA Tour, but since joining two seasons ago, he's wasted no time in showing everyone what he's capable of. Mitchell earned over $1.6 million in his rookie season and finished 68th on the FedEx list. This past season, Mitchell took his game to the next level by winning the Honda Classic and taking in over $2.3 million in earnings. Mitchell set the bar pretty high last season, but he appears to have the game to go even higher on the money list this season. As such, he's coin-flip for the upcoming season. There are safer picks at this price, but Mitchell might have more upside than most in this range.
Mitchell finished runner-up at the Corales Puntacana Resort & Club Championship and 3rd at the AT&T Byron Nelson, but he probably earned more air time for crashing the top-70 while playing at the Dell Technologies Championship in early September. Lost in all of that perhaps was that Mitchell was a rookie this season...who finished inside the top-70 on the FedEx points list. Not a bad start to one's career. In addition to the runner up and 3rd-place finish, he posted two additional top-10s throughout the season and made 21 of 29 cuts. Mitchell is just 26 and he could be an elite player someday, but the fact remains that there's a lot unknown about him at this stage. As such, the bar is simply set too high to take him in a salary cap league this season.
After missing out on the top-25 on the Web.com Tour and automatic PGA Tour exemption by just one slot, Mitchell forged through the Web.com Tour Finals with a strong showing to earn his PGA Tour card for the first time. On the Web.com last year Mitchell posted six top-10s including his best finish, a third at the News Sentinel Open. Mitchell's clear strength is his immense length off the tee that affords him plenty of birdies or better on par-5s, but the rest of his game has room for improvement. Mitchell could surprise at some weaker-fielded events where length is advantageous, but otherwise shouldn't be on your radar this season.
More Fantasy News