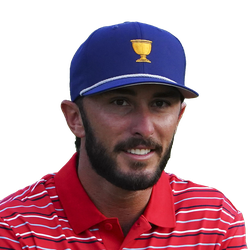 2021–22 Stats
Rank
5
Winnings
$5,289,843
Winnings/Entry
$220,410
Entries
24
Rounds
86
2022–23 Fantasy Outlook
Homa began the year with a victory at the Fortinet Championship and proved to be very consistent throughout the spring. He then was able to get himself back in the winner's circle for a fourth time in his career at the Wells Fargo Championship. Homa would make the Tour Championship for the first time and score a T5 finish. If you are looking for the key to Homa's leap this year it has been in the short game department where he now ranks 57th in SG: Around-the-Green, a stat that he has been mired outside the top-150 in for the large majority of his career. The rest of his bag is extremely consistent, so it's hard to see why he couldn't have another very solid season in 2022-23. Whether he wins again, let alone multiple times, is another story. Read Past Outlooks
read more
Handedness Right
Status Pro
Height 6'1"
Weight 180 lbs
DOB 11/19/1990
Birthplace Burbank, California
College California
Country USA
Read More News
PGA Stats
Loading Golf Stats...
Tournament Results
Scoring
FanDuel
DraftKings
Loading Tournament Log...
PGA Advanced Stats
Loading Advanced Stats...
Recent RotoWire Articles Featuring Max Homa
Weekly Preview: Sanderson Farms Championship
2 days ago
2 days ago
Denny McCarthy has fared well at Jackson Country Club, and Greg Vara expects him to come through again this week.
2022 Sanderson Farms Championship Betting: Picks, Odds, Predictions and Best Bets
2 days ago
2 days ago
Ryan Pohle breaks down the odds for this week's event and tells you why it would be wise to throw a few bucks in the direction of Luke List.
Weekly Recap: Presidents Cup Appraisal
3 days ago
3 days ago
Len Hochberg looks back at the U.S. Team's latest victory over the International Team in the Presidents Cup and grades the 24 golfers that took part.
2022 Presidents Cup Betting: Picks, Odds, Predictions and Best Bets
8 days ago
8 days ago
Ryan Pohle runs down his favorite wagers for the Presidents Cup and explains why he is targeting talented youngster Tom Kim.
DraftKings PGA: Presidents Cup Picks and Strategy
9 days ago
9 days ago
Len Hochberg gives you the lowdown on this week's DraftKings contests and tells you why to train your eyes on Jordan Spieth.
Past Fantasy Outlooks
2022
2020
2019
2018
2016
2015
Homa struggled to find his footing as a rookie on the PGA Tour in 2015, but after a year away he earned his first win and more than $2 million. A decent 2019-20 season was followed by his best season yet in 2020-21. Homa set the bar pretty high, but he appears to be a golfer who might be destined for better things. His price will prevent him from being a great salary cap option this season, but there is a good chance he improves upon his numbers from last year. Just how much is the question.
Homa picked up his first win in the 2018-19 campaign and while he didn't win this past season, it was statistically a better performance. Homa finished 40 spots better in SG: Total and had four more top-25s. Homa is fairly solid through the bag, but one big area for improvement would be short game, as he ranks 187th in SG: Around-the-green.
Perhaps no victory was more unexpected last season than Homa's, who captured the Wells Fargo Championship in May. Homa's first go-round on the PGA Tour came in 2015, and things did not go as planned. Homa missed more cuts than he made and ended the season with less than $400k in earnings. In limited action the following season, Homa only managed $18k in earnings. Things weren't looking much better this past season until his victory in May, which is what made that win so surprising. Considering Homa has just one year of success under his belt on the PGA Tour, the bar is simply set too high for salary cap purposes this season.
Homa missed a whopping 15 cuts in 17 starts during his 2016-17 campaign on the PGA Tour, so he was forced to spend the 2018 season at the Web.com level where he notched nine top-25s in 27 events. With top-10s at the Albertsons Boise Open and DAP Championship, Homa finished top-25 overall during the Web.com Tour Finals. He's missed the cut in well over half of his 53 career starts on the PGA Tour, however.
The youngster out of UCLA was a rookie in 2014-15 and enjoyed limited success. So he returned to the Web.com Tour and finished 23rd on the regular-season money list to get a second try. He should be better suited this time around, but whether enough to reach the playoffs and keep his card is a big question mark.
Seeking Special Temporary Membership, Homa played eight events last year while not accruing FedEx Cup points. He started off terrifically, finishing T9 as a sponsor exemption in the season-opening Frys, using that top 10 to get into the Shriners, in which he finished 30th. But that was that, and his bid for STM stalled. He turned to the Web.com Tour in May, and finished in the top 25 in regular-season earnings. So he’s a bit hard to predict. But top 125 seems out of range.
More Fantasy News