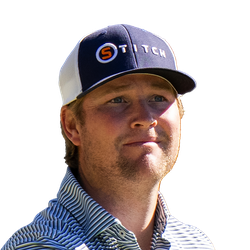 2022–23 Stats
Rank
77
Winnings
$372,220
Winnings/Entry
$74,444
Entries
5
Rounds
13
2022–23 Fantasy Outlook
Mullinax spent his first three full seasons on the PGA Tour outside the top-100 and only after a year off did he find his game. It's hard to say what happened in that year off, perhaps it was rediscovering how to win that did the trick, but whatever the case, Mullinax was able to produce his best PGA Tour season to date this past year. It is a bit concerning to see such a huge jump out of the blue however, and his MC percentage was 50% this past season, so there are plenty of red flags entering this season. Mullinax is just 30 years old and he might have just figured everything out this past season, but it's probably wise to take a wait and see approach on him this season. Read Past Outlooks
read more
Handedness Right
Status Pro
Height 6'4"
Weight 195 lbs
DOB 6/29/1992
Birthplace Gardendale, Alabama
College Alabama
Country USA
Read More News
PGA Stats
Loading Golf Stats...
Tournament Results
Scoring
FanDuel
DraftKings
Loading Tournament Log...
PGA Advanced Stats
Loading Advanced Stats...
Recent RotoWire Articles Featuring Trey Mullinax
Weekly Recap: Finishing with a Flourish
16 days ago
16 days ago
One season wrapped up Sunday and a portion of another did as well, and two golfers -- including Jon Rahm -- went out on a high note.
2022 RSM Classic Betting: Picks, Odds, Predictions and Best Bets
22 days ago
22 days ago
Aaron Rai recorded a quality result last week, and Ryan Pohle is willing to wager that he notches another at Sea Island Resort.
Weekly Recap: Take a Bow, Finau
23 days ago
23 days ago
Tony Finau took charge Friday in Houston, and when it was all said and done, he found himself in the winner's circle for the fifth time in his career.
2022 THE CJ CUP in South Carolina Betting: Picks, Odds, Predictions and Best Bets
50 days ago
50 days ago
Some bettors may be overlooking K.H. Lee at Congaree, but Ryan Pohle is not one of them.
FanDuel PGA: THE CJ CUP in South Carolina Picks and Strategy
50 days ago
50 days ago
Tom Hoge has opened the season on a roll, and that helps him land a spot among Ryan Andrade's picks to click in this week's contests on FanDuel.
Past Fantasy Outlooks
2022
2018
2017
2016
Mullinax advanced to the FedExCup Playoffs during his second season on tour in 2018 when he accrued more than $1.1M in official earnings thanks to a runner-up effort at the Valero Texas Open, but he failed to record a single top-10 in 2019 before spending the past season on the Korn Ferry Tour. However, a runner-up performance at the KFT Championship launched Mullinax into the No. 2 spot of the Finals 25. He ranked fifth on the KFT in driving distance, but fell outside the top 100 in both GIR and FIR percentage.
Mullinax fell short of securing his PGA Tour card during his rookie season of 2016-2017, but he took advantage of his partial-exempt status and nearly cracked the top-100 on the FedEx points list last season. Mullinax earned over $400k more in his second season than he did in his first season and that can be traced to a runner-up finish at the Valero Texas Open. In addition to posting his first runner-up on the PGA Tour, Mullinax also scored two more top-10s than his previous season and he upped his made-cuts percentage. In other words, everything is trending in the right direction entering this season. As such, Harkins makes for an interesting salary cap selection this season.
The 25-year-old Mullinax enjoyed a top-10 finish at the U.S. Open at Erins Hills, but did little outside of that as he struggled just to make cuts in his rookie season. Among the longest hitters on the PGA Tour with a close to 310-yard average, Mullinax will need to vastly improve his iron and wedge game to have a realistic shot at getting fully exempt on the PGA Tour. While there's still time to develop into a steady PGA Tour commodity, expect a similar outcome as last season for Mullinax. He's not worth the risk in salary cap leagues and will likely go around the 12th round in draft leagues.
This name will be familiar for anyone who follows college golf, as Mullinax played at Alabama and was a teammate of guys like Justin Thomas, who won NCAA titles in 2013 and 2014. Now his individual game is getting the spotlight after a 2016 Web.com Tour campaign in which he won the Rex Hospital Open and had six other top-25 finishes, enough to clinch a spot on the PGA Tour. This combination is pretty sweet too: 318.2 yards off the tee, 47th in greens hit, third in putting average.
More Fantasy News