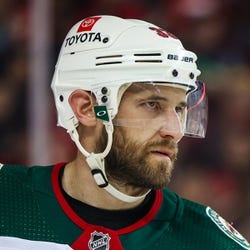 2021 Stats
G
2
A
28
PP Pts
4
+/-
41
PIM
34
2022 Projections
G
A
PP Pts
+/-
PIM
Unlock Our Projections
2022 Fantasy Outlook
Signed by the Wild to a one-year, $5 million contract in the summer of 2021, Goligoski debuted in his native Minnesota a season ago and immediately filled a key role for the club. He posted 30 points in 72 games, the 10th time in his career he has reached that plateau. Now 37 years old, Goligoski inked a two-year, $4 million extension with the Wild in March. The deal ensures Goligoski should have a regular spot in the lineup for the next couple of years, so there should be enough production here to carve out late-round value in extremely deep fantasy formats, even if the upside is quite limited. Read Past Outlooks
read more
#