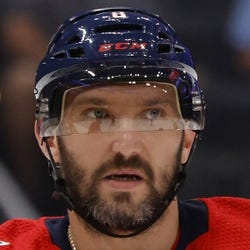 2022 Stats
G
32
A
22
PP Pts
18
+/-
-2
PIM
20
ROS Projections
G
A
PP Pts
+/-
PIM
Unlock Our Projections
2022 Fantasy Outlook
Betting on a player who will turn 37 years of age prior to the start of the season is typically a recipe for disaster, but we all know by now that Ovechkin is no mere mortal. Ovechkin scored 50 goals a season ago for the ninth time in his career, tying him with Mike Bossy and Wayne Gretzky for the most in NHL history. Ovechkin fired 334 shots on goal last season, second to only Toronto's Auston Matthews. He also posted more than 150 hits (155) for the third time in the past four years. Ovechkin only knows one way to play and that's straight ahead with an edge. A dip may come eventually, but we haven't seen it yet. It should be safe to invest in "The Great 8" for at least another season. Read Past Outlooks
read more
#