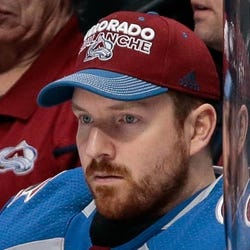 Calculate Stats Over Time
Just click on any two dates.
Scoring
FanDuel
DraftKings
Yahoo DFS
FantasyDraft
Head2Head
Loading Goalie Game Log...
2021–22 Time On Ice Stats
Panthers Depth Chart
Our full team depth charts are reserved for RotoWire subscribers.
Subscribe Now
Recent RotoWire Articles Featuring Andrew Hammond
Yahoo DFS Hockey: Thursday Picks
163 days ago
163 days ago
Jordan Mazzara checks out Thursday's slate as Kevin Fiala and the Wild host the Canucks.
The Goalie Report: Risers & Fallers
164 days ago
164 days ago
Jason Chen analyzes goalie situations around the league, including in Montreal where Carey Price is back and looking good.
Frozen Fantasy: Throw Caution to the Wind
174 days ago
174 days ago
Do you take a chance on Carey Price returning? Janet Eagleson examines that situation and other potential late-season fantasy additions.
DraftKings NHL: Wednesday Breakdown
192 days ago
192 days ago
Sasha Yodashkin tees up Wednesday's DraftKings slate, rolling with Blackhawks star Patrick Kane against Anaheim.
Hutch's Hockey: Trade Deadline Reactions
194 days ago
194 days ago
Shawn Hutchinson breaks down the fantasy changes from all of the trades after the NHL's trade deadline.
Past Fantasy Outlooks
2018
2017
2016
2015
2014
2013
Since his magical run with the Senators in 2014-15, Hammond has failed to make any real impact at the NHL level, appearing in just 31 combined games over the last three seasons. Following a one-year stop in Denver, Hammond has moved on to the Wild and will compete in training camp with Alex Stalock for the backup gig behind Devan Dubnyk. Regardless of how Hammond fares in the competition, Dubnyk remains the clear No.1 for Minnesota after starting 60 contests for the Wild last season despite missing some time in late December due to injury. Hammond and Stalock will essentially be fighting for scraps in net and the right to take over the lead role should Dubnyk suffer an injury.
Hammond struggled in limited action with the big club last season, posting an 0-2-0 record while registering an ugly 4.08 GAA and .837 save percentage over six appearances. The 29-year-old backstop wasn't much better in the minors, compiling a 2-3-0 record while posting a subpar 3.24 GAA and .884 save percentage over five appearances. Mike Condon will serve as starter Craig Anderson’s backup next season, which means Hammond will likely slot in as AHL Belleville’s starter. In other words, barring major injuries ahead of him, it’s hard to imagine a scenario in which Hammond has any value in season-long fantasy leagues in 2017-18.
The 28-year-old Hammond unsurprisingly hit a steep decline after a magical run in 2014-15, appearing in 24 games and compiling a 7-11-4 record with a .914 save percentage and 2.65 GAA. Craig Anderson held onto the No. 1 role and didn't exactly take a star turn, but still made 60 starts and never feared a Hamburglar takeover. Indeed, Hammond looked downright awful a number of times, ensuring that he never even approached making inroads on Anderson's job despite the veteran's mediocrity. The B.C. native is cemented as the backup heading into 2016-17, leaving him off the radar in most fantasy formats.
Entering last year, few even among Senators fans knew the name of the man they would come to call The Hamburglar. But after his spectacular turn down the stretch -- the 20-1-2 run with a 1.79 GAA and .941 save percentage by a 26-year-old rookie was one for the history books -- everyone knows Hammond's name now. The Sens signed Hammond to a three-year extension, and now we'll see if last season was a flash in the pan. There are signs that that's exactly what it was -- Hammond had an awful .898 save percentage in the AHL last year, and he'd never posted a mark higher than .917 at any level of hockey, so it shouldn't have been too surprising when he finally faded in the playoffs, ceding the starting job back to Craig Anderson. The veteran Anderson projects to remain atop the depth chart to open the 2015-16 campaign, so Hammond's going to have to outperform him once more to earn fantasy-relevant playing time.
Hammond will enter 2014-15 as the number one netminder for AHL Binghamton once again, and with Craig Anderson and newly-signed Robin Lehner above him in the NHL, he won't get recalled unless there's an injury. Considering he wasn't exactly stellar in the minors last season (2.81 GAA, .910 save percentage in 48 appearances), it's probably not worth monitoring his play too much.
Hammond will make the jump to the pros this season, after spending the last four years playing college hockey for Bowling Green State University of the CCHA. The young goaltender put up decent stats during his senior season, posting a save percentage of .917 and a 2.47 GAA. Nevertheless, he'll need to prove himself in the AHL before ever getting a chance to make an impact in the NHL.
More Fantasy News