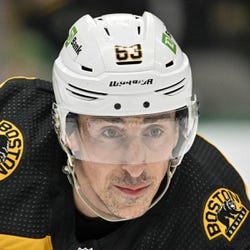 2022 Stats
G
16
A
30
PP Pts
23
+/-
18
PIM
38
ROS Projections
G
A
PP Pts
+/-
PIM
Unlock Our Projections
2022 Fantasy Outlook
Marchand's usual antics cost him a six-game suspension in the middle of February, and he missed 12 games for the entire season. He was his usual productive self when in the lineup, finishing with year with 32 goals and 80 points in 70 games. A good portion of Marchand's fantasy value is the result of his power-play production, so it was nice to see him post at least 23 power-play points (27) for the fifth time in the past six years. That said, Marchand underwent double hip surgery in May, which is expected to sideline him until late November, at a minimum. If the Bruins get off to a quick start, they could easily take it slow with one of their franchise players. Keep that in mind and don't reach for Marchand on draft day. Read Past Outlooks
read more
#