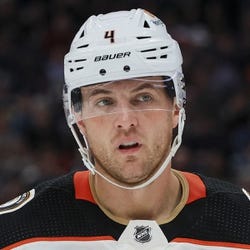 2022 Stats
G
7
A
19
PP Pts
11
+/-
-12
PIM
6
ROS Projections
G
A
PP Pts
+/-
PIM
Unlock Our Projections
2022 Fantasy Outlook
Buoyed by 18 points with the man advantage, his highest total since his rookie year of 2010-11, Fowler finished last season with a career-best 42 points in 76 games. He also averaged more than 24 minutes per game (24:25) for the third time in six years. That said, the offensive production doesn't appear to be sustainable moving forward. The Ducks signed John Klingberg to a one-year, $7 million contract in free agency to serve as the club's unquestioned No. 1 power-play quarterback. The move cripples the fantasy value of both Fowler and fellow veteran defender Kevin Shattenkirk, as both seem likely to be relegated to the second unit. Fowler is again nothing more than a late-round dart throw in standard formats. Read Past Outlooks
read more
#