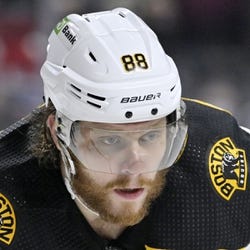 2022 Stats
G
38
A
33
PP Pts
28
+/-
24
PIM
32
ROS Projections
G
A
PP Pts
+/-
PIM
Unlock Our Projections
2022 Fantasy Outlook
One of the NHL's premier snipers, Pastrnak posted 40 goals a season ago and finished sixth in the league with 312 shots on goal, all while missing 10 games in April due to injury and rest. Pastrnak has made a living on the power play, posting no fewer than 26 points with the man advantage four of the past five years. That said, there is some risk this season with Pastrnak that we haven't seen in the past. For starters, linemate Brad Marchand will be out until at least late November due to hip surgery. Patrice Bergeron will be back, but he's recovering from an elbow injury prior to camp. The 26-year-old Pastrnak should be fine regardless, but it's a situation to monitor as training camp nears. Read Past Outlooks
read more
#