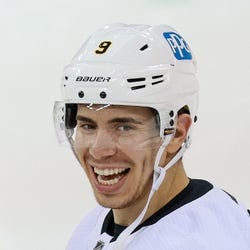 Out
Injury Lower Body
Est. Return 12/15/2022
2022 Stats
G
6
A
3
PP Pts
4
+/-
-3
PIM
8
ROS Projections
G
A
PP Pts
+/-
PIM
Unlock Our Projections
2022 Fantasy Outlook
Rodrigues was a lifesaver for the Penguins a season ago, playing in all 82 games for the club while posting career-best marks in goals (19), assists (24), points (43), shots on goal (243), and power-play points (eight). Rodrigues played up in the lineup early in the season before settling into his usual depth role in the latter stages of the year and into the postseason. Projecting Rodrigues as a top-six center is a stretch, but he's a solid player and a good penalty killer, so it's surprising he remained unsigned deep into free agency. Rodrigues was yet to ink a deal with a team as of late August and projecting his fantasy value moving forward is nearly impossible until we figure out his ultimate destination. Read Past Outlooks
read more
#

Calculate Stats Over Time
Just click on any two dates.
Scoring
FanDuel
DraftKings
Yahoo DFS
FantasyDraft
Head2Head
Loading Skater Game Log...
2022–23 Time On Ice Stats
Ice Time
Power Play
Short-Handed
2020–21
14:06
1:05
0:36
2021–22
15:50
1:55
0:25
2022–23
18:07
3:15
1:19
Avalanche Depth Chart
Our full team depth charts are reserved for RotoWire subscribers.
Subscribe Now
Avalanche Power Play Depth Chart
Our full team depth charts are reserved for RotoWire subscribers.
Subscribe Now
Recent RotoWire Articles Featuring Evan Rodrigues
NHL Barometer: Risers and Fallers
5 days ago
5 days ago
This week's risers section is led by Sean Monahan, who's been in vintage form of late after bouncing back from a slow start.
Past Fantasy Outlooks
2021
2020
2019
2018
2017
2015
Rodrigues doesn't have a secure spot in the Penguins' lineup, but when he's on the ice, he's proven himself to be a capable bottom-six contributor. He scored seven goals and 14 points in 38 games last season. That scoring pace would've given him his first 30-point campaign in a full 82-game season and his 10.8 shooting percentage was the second highest of his NHL career. Entering the 2021-22 season, Rodrigues will have to fight to maintain a consistent bottom-six role and could often find himself as a healthy scratch.
After being shipped out via trade in August, Rodrigues turned around and re-signed with the Penguins after the Maple Leafs opted to not give him a qualifying offer. In just seven regular-season contests with Pittsburgh, the depth center managed a lone goal on 11 shots, four PIM and four hits but was unable to convince coach Mike Sullivan to play him during the postseason. Still, the 26-year-old Toronto native has a pair of 25-point campaigns under his belt and is capable of contributing at a similar pace on Pittsburgh's revamped third line alongside Jared McCann and Mark Jankowski in 2020-21.
Rodrigues set a new career mark with 29 points in 74 games last season, but more was expected of the middle-six forward considering he added only four points in 26 extra games compared to his 2017-18 output. His ability to line up at either center or wing should ensure Rodrigues plays a meaningful role for the Sabres, though grabbing a spot on the No. 2 power-play unit and climbing onto the second line rather than the third will be pivotal for his fantasy value. If he fails to do either, Rodrigues can be ignored in all but the deepest of formats.
The third-year pro showed plenty of potential with 25 points in 48 games in a limited role, averaging close to 14 minutes per game to cap off the 2017-18 season. Even though he hasn't played alongside Boston U teammate Jack Eichel with the Sabres, Rodrigues has proven that he's a capable third-line forward in his own right. However, he'll have to fight for his roster spot and cement his spot or otherwise face splitting the season between the NHL and AHL yet again. A 15-goal season isn't out of the question for Rodrigues, but he'll need enough ice time and the right linemates to do so. Rodrigues is a medium-floor, low-ceiling young player for fantasy owners.
Rodrigues provided a bottom-six spark for the Sabres in his second pro season, appearing in 30 games and totaling six points after a midseason call-up. Though Rodrigues averaged a little less than 13 minutes per game last year, he can play both center and wing, which will help him in his case to win a roster spot for the 2017-18 campaign. His versatility may also allow him to move up the depth chart in time, but there’s no reason to count on that, considering Buffalo’s many forward options. Still, the Sabres really like the speed, energy and tenacity he brings, so he has a good chance of filling a third- or fourth-line role with the big club come Opening Night.
As a senior at Boston University last season, Rodrigues was second in team scoring only to linemate and top Sabres pick Jack Eichel, finishing with 21 goals and 61 points in 41 games. Signed as an undrafted free agent, Rodrigues has some offensive potential, but needs to play with good offensive players in order to produce. The Sabres will give him a test run as a depth scoring winger with AHL Rochester and go from there.
More Fantasy News