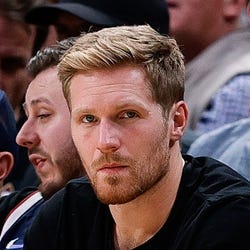 IR
Injury Lower Body
Est. Return 10/19/2022
2021 Stats
G
30
A
29
PP Pts
15
+/-
27
PIM
78
2022 Projections
G
A
PP Pts
+/-
PIM
Unlock Our Projections
2022 Fantasy Outlook
A knee injury cost Landeskog the last 20 regular-season games. It was a crushing blow for fantasy managers as the ailment cost Landeskog about a quarter of the year, but the Swede was his usual productive self when healthy, finishing with 30 goals and 59 points in 51 games. Landeskog also posted exactly a 20 percent shooting percentage, by far the highest of his career. That's an unsustainable number and one that seems likely to regress this coming year, but Landeskog's production isn't at much risk of decreasing if he is seeing roughly four minutes' worth of power-play time per game. Landeskog is a safe early-round fantasy option. Read Past Outlooks
read more
#