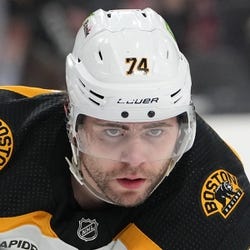 IR-LT
Injury Lower Body
Est. Return 2/11/2023
2022 Stats
G
16
A
14
PP Pts
11
+/-
15
PIM
8
ROS Projections
G
A
PP Pts
+/-
PIM
Unlock Our Projections
2022 Fantasy Outlook
The old adage that time heals all wounds certainly would apply for DeBrusk. The 2015 first-rounder (14th overall) requested a trade from the Bruins. The team didn't accommodate him, so DeBrusk stayed with the club, playing 77 games a season ago and finishing with 25 goals, the second time in his career he has reached that mark. DeBrusk then reportedly informed Boston management this offseason that he would like to stay with the club moving forward. DeBrusk has never managed more than 43 points in a single season because he doesn't pick up many assists, but he would appear to be one of the leading candidates to open the 2022-23 campaign on Boston's top line alongside Patrice Bergeron and David Pastrnak while Brad Marchand is sidelined in the early going due to double-hip surgery. Read Past Outlooks
read more
#

Calculate Stats Over Time
Just click on any two dates.
Scoring
FanDuel
DraftKings
Yahoo DFS
FantasyDraft
Head2Head
Loading Skater Game Log...
2022–23 Time On Ice Stats
Ice Time
Power Play
Short-Handed
2020–21
14:53
1:23
0:42
2021–22
15:02
1:18
0:38
2022–23
17:08
3:06
1:28
Bruins Depth Chart
Our full team depth charts are reserved for RotoWire subscribers.
Subscribe Now
Bruins Power Play Depth Chart
Our full team depth charts are reserved for RotoWire subscribers.
Subscribe Now
Recent RotoWire Articles Featuring Jake DeBrusk See More
Trade Tips: Trade Season Officially Opens
3 days ago
3 days ago
Jason Chen analyzes the fantasy impact of Bo Horvat's move to the Islanders and recommends players to target before potential deals increase their price tags.
NHL Barometer: Risers and Fallers
25 days ago
25 days ago
This week's set of risers is led by Calgary center Elias Lindholm, who has 21 points in his last 18 games.
FanDuel NHL: Sunday Targets
27 days ago
27 days ago
A top-tier defender as a salary saver? Read on to see who Michael Finewax is talking about.
DraftKings NHL: Saturday Breakdown
28 days ago
28 days ago
Chris Morgan delivers his picks to help lead you to DFS glory Saturday.
NHL Waiver Wire: Pickups of the Week
36 days ago
36 days ago
This week's set of waiver recommendations includes Brock Boeser, who's still widely available despite his role on a strong power-play unit.
Past Fantasy Outlooks
2021
2020
2019
2018
2017
2016
2015
DeBrusk's 2020-21 season was an unmitigated disaster, as he dealt with multiple injuries in addition to spending time on the COVID-19 protocols list. He ended up playing in just 41 regular-season games, managing a measly five goals and 19 points. At the heart of DeBrusk's freefall was a colossal drop in terms of production with the man advantage. DeBrusk saw just 1:23 worth of power-play ice time per game (leading to three man-advantage points) in 2020-21, compared to 2:34 per game (10 points) two years prior. Clearly not confident in DeBrusk's ability to bounce back to his previous scoring levels, the Bruins added both Nick Foligno and Erik Haula as unrestricted free agents this summer. That leaves DeBrusk in a likely fourth-line role to begin the campaign, if not the press box, and miles away from being a viable fantasy option.
DeBrusk took a bit of a step back in 2019-20 after racking up 27 goals and 42 points in 68 games during the previous campaign, ending the shortened season with 19 goals and 35 points in 65 appearances, but that was to be expected, as he rode an unsustainable 17.3 shooting percentage in 2018-19. The 24-year-old winger will once again occupy a middle-six role while skating on the Bruins' second power-play unit in 2020-21. He shouldn't have any trouble playing at a 20-plus goal, 40-plus point pace while notching double-digit power-play points over the course of a full season, and he'll also average around 2.5 shots per game, giving him appeal as a depth option in the later rounds of fantasy drafts.
Selected No. 14 overall by the Bruins in the 2015 NHL Entry Draft after tallying 42 goals for WHL Swift Current in 2014-15, DeBrusk has quickly established himself as an ascending young winger for the Bruins. Though the 22-year-old endured some scoring slumps during the 2018-19 season, he still managed to light the lamp 27 times (while adding 15 helpers) in 68 games. DeBrusk's hard-driving style and willingness to shoot remain his strengths, and if he can add a little more consistency to his game, the 6-foot, 188-pounder can take his production (in both real and fantasy terms) to the next level. As it stands, he's destined to see plenty of top-six work this coming season, as well as second-unit power-play action.
DeBrusk, who the Bruins selected No. 14 overall in the 2015 NHL Entry Draft, should be recovered from an AC joint sprain in his shoulder well before the start of training camp. As a rookie in 2017-18, he logged 16 goals and 43 points in 70 games, while displaying poise and potential that foreshadows improved numbers down the road. A hard-driving style and willingness to shoot are the 21-year-old's calling cards and he'll be in the mix to secure top-six work up front for the Bruins this coming season.
DeBrusk, whom the Bruins took 14th overall in the 2015 NHL Entry draft, overcame a slow start in 2016-17 to log 19 goals and 30 assists in 74 games for AHL Providence. Look for the 20-year-old to receive an opportunity to make the big club out of training camp; down the road, his willingness to shoot and well-rounded offensive game could eventually lead to top-six work with the B’s. In the short term, he'll battle for slotting with fellow forward prospects Anders Bjork, Jakob Forsbacka-Karlsson, Zach Senyshyn and Danton Heinen.
Selected No. 14 overall by the Bruins in the 2015 NHL Entry Draft after tallying 42 goals for WHL Swift Current in 2014-15, DeBrusk's production fell to 21 goals in 61 games last season, though a painful groin injury that he suffered back on November while blocking a shot impacted his season negatively. Now well past the issue, DeBrusk is back on the fast track after a strong development camp performance. Down the road, the youngster has the potential to blossom into a legit goal scorer as a pro, with his shot and quick release handy assets in that regard.
DeBrusk, who recorded 42 goals and added 39 assists in 72 games with WHL Swift Current in 2014-15, needs additional seasoning at the junior level before he mounts a real challenge to make the Bruins roster. Nevertheless, a particularly nifty shootout goal during the Bruins’ Development Camp this summer provided observers with a tangible reminder of why the B's invested a first-round pick into adding the sniper to their growing collection of young prospects.
More Fantasy News