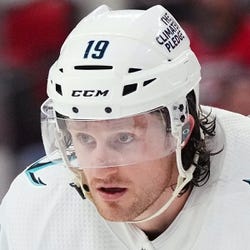 2022 Stats
G
23
A
12
PP Pts
9
+/-
7
PIM
8
ROS Projections
G
A
PP Pts
+/-
PIM
Unlock Our Projections
2022 Fantasy Outlook
McCann finished his first season with the expansion Kraken hot, posting seven points in his final eight games to finish with 50 for the year, the first time in his career he reached that mark. McCann saw a significant bump in usage in all situations given the lack of depth on the Seattle roster. His 2:36 per game with the man advantage was by far a new career high and that additional time resulted in 17 power-play points, one more than McCann posted in the prior two seasons combined. The Kraken added a pair of reliable forwards this offseason in Andre Burakovsky and Oliver Bjorkstrand, so McCann should have better linemates this year, making him a sneaky mid-round option in fantasy leagues. Read Past Outlooks
read more
#

Calculate Stats Over Time
Just click on any two dates.
Scoring
FanDuel
DraftKings
Yahoo DFS
FantasyDraft
Head2Head
Loading Skater Game Log...
2022–23 Time On Ice Stats
Ice Time
Power Play
Short-Handed
2020–21
14:07
1:59
0:02
2021–22
16:08
2:36
0:13
2022–23
15:23
2:31
0:35
Kraken Depth Chart
Our full team depth charts are reserved for RotoWire subscribers.
Subscribe Now
Kraken Power Play Depth Chart
Our full team depth charts are reserved for RotoWire subscribers.
Subscribe Now
Recent RotoWire Articles Featuring Jared McCann See More
NHL Waiver Wire: Pickups of the Week
Yesterday
Yesterday
Evan Berofsky's latest set of pickup recommendations includes rookie defenseman Jake Sanderson, who should be a big part of Ottawa's playoff push.
Past Fantasy Outlooks
2021
2020
2019
2018
2017
2016
With a lack of center depth in Seattle, McCann has a genuine chance to play top-six minutes until Yanni Gourde (shoulder) is healthy. For much of his career, McCann has been a third-liner, but he's been productive with at least 30 points in each of the last two campaigns. He racked up 14 goals and 18 assists last year with the Penguins, although the quality of forward talent surrounding him with the Kraken will be significantly lower, and his 15.1 shooting percentage is likely to dip. The 25-year-old still presents an intriguing option for managers in deeper formats -- McCann is likely to see power-play time, and a full season could give him a shot at his first 40-point campaign.
Figuring out where McCann fits into the Penguins' lineup didn't get any easier this offseason when the team brought in Mark Jankowski and Evan Rodrigues, both of whom can play center. Still, even if he projects to play on the third-line wing, the 24-year-old McCann will likely continue to serve as the next man up for the top six if and when Sidney Crosby or Evgeni Malkin picks up an injury. Despite being maligned as an inconsistent producer, the gritty Ontario native still managed to tie his career high of 35 points and set a new personal best in assists (21) and power-play points (six) last season.
After putting up just 18 points in 46 games with the Panthers, McCann was traded to Pittsburgh as part of a package deal in February. The change of scenery seemed to invigorate the left-handed forward, as he went onto tally 17 points in 32 games with the Penguins. The 23-year-old set career highs in goals (19) and points (35) in 2018-19, and could be in a position to improve on those numbers in 2019-20. While he was initially brought in to be a third-line center, McCann paired well with Sidney Crosby and Jake Guentzel on Pittsburgh's top line, and may find himself playing there again this year, though given his skills as a two-way forward, he could also lineup with Evengi Malkin. Either way, coach Mike Sullivan will be hard pressed to keep the smooth-skating McCann out of a top-six role this season.
McCann played just 29 games at the NHL level during the 2016-17 season, splitting time between the big club and AHL Springfield. However, the 2014 first-round (24th overall) pick was able to earn an everyday role with the Panthers last season, scoring nine goals and 28 points across 68 appearances. He then signed a two-year deal to stay with Florida during the 2018 offseason, so the team is clearly confident in his ability to be a full-time NHL forward. After averaging 13:15 of ice time per game last year, that number should increase slightly, setting up McCann to clear 25 points once again in 2018-19.
Acquired in an offseason trade from the Canucks prior to last season, McCann managed just one goal and seven points in 29 games with the Panthers; he spent most of the campaign in the AHL, where he scored 25 points in 42 games. Florida’s pretty deep down the middle, which means that if McCann sticks with the big club, it'll likely be as a winger. The 2014 first-round pick has lots of talent and is known for his speed and shooting ability, but he currently lacks the strength and experience to be a reliable offensive weapon in the NHL. McCann may split the season between the NHL and AHL as he continues to develop.
Vancouver’s 2014 first-rounder (24th overall), McCann totaled nine goals and nine assists in 69 games as a rookie last season, but was dealt to the Panthers in the offseason along with a couple picks for blueliner Erik Gudbranson. While the 20-year-old is a natural centerman, he’ll likely shift over to the wing – likely in a third-line role – due to Florida’s collection of young talent down the middle. Despite his pedigree, McCann doesn’t have game-breaking talent, but he’ll likely exceed last season’s production with a year of NHL experience under his belt.
More Fantasy News