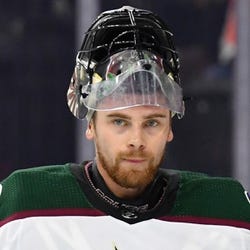 2022 Stats
W
6
L
5
SO
2
GAA
2.97
SV%
.916
ROS Projections
W
L
SO
GAA
SV%
Unlock Our Projections
2022 Fantasy Outlook
Vejmelka arrived stateside last season after many years of playing in his native Czechia and established himself as Arizona's No. 1 goaltender. Unfortunately that isn't a gig these days that will do wonders for your statistics. All told, Vejmelka played in 52 games, posting a horrific 13-32-3 record along with a 3.68 GAA and .898 save percentage. He had one shutout. The overall state of the Coyotes' franchise at the moment makes it nearly impossible to trust any goaltender on their team, Vejmelka included, from a fantasy perspective. He's nothing more than a late-round dart throw for managers looking for a goalie who should get consistent playing time. Read Past Outlooks
read more
#

Calculate Stats Over Time
Just click on any two dates.
Scoring
FanDuel
DraftKings
Yahoo DFS
FantasyDraft
Head2Head
Loading Goalie Game Log...
2022–23 Time On Ice Stats
Coyotes Depth Chart
Our full team depth charts are reserved for RotoWire subscribers.
Subscribe Now
Recent RotoWire Articles Featuring Karel Vejmelka
NHL Waiver Wire: Pickups of the Week
3 days ago
3 days ago
Evan Berofsky's weekly waiver recommendations include 39-year-old defenseman Mark Giordano, who's handling a larger role amid an injury crisis in Toronto.
NHL Barometer: Risers and Fallers
13 days ago
13 days ago
This week's risers section is led by Clayton Keller, who's blossomed into a point-per-game player.
Frozen Fantasy: Joy of the Game
15 days ago
15 days ago
Janet Eagleson reminds us to enjoy the special moments in life, like when you can add Jason Zucker to your fantasy rosters.
The Goalie Report: Risers & Fallers
16 days ago
16 days ago
Jason Chen's list of featured goalies includes Akira Schmid, who suddenly has playing time for the division-leading Devils thanks to injuries ahead of him.
DraftKings NHL: Saturday Breakdown
16 days ago
16 days ago
Chris Morgan previews Saturday’s DraftKings slate, making his picks to help you craft a winning lineup.
More Fantasy News