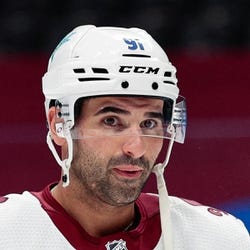 2021 Stats
G
28
A
59
PP Pts
29
+/-
13
PIM
71
2022 Projections
G
A
PP Pts
+/-
PIM
Unlock Our Projections
2022 Fantasy Outlook
Kadri had never threatened a point-per-game pace over the course of a full 82-game season his entire career, but he blew past that mark and then some a year ago, finishing with 28 goals and 87 points in 71 games. Kadri missed four games in Colorado's run to the Stanley Cup with a thumb issue, but returned for their final three contests. Kadri picked a great time for a career-best year, as he entered unrestricted free agency this past summer. He stayed on the market for over a month before signing with the Flames in August. The center, who turns 32 in October, will likely reprise his second-line role with his new team, though Calgary's lack of depth compared to Colorado - as well as Kadri's heavy expected regression - will likely lead to him posting noticeably lower scoring numbers. Read Past Outlooks
read more
#