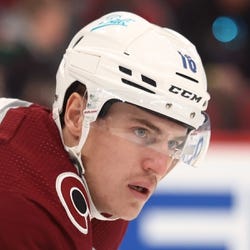 2022 Stats
G
2
A
5
PP Pts
0
+/-
4
PIM
21
ROS Projections
G
A
PP Pts
+/-
PIM
Unlock Our Projections
2022 Fantasy Outlook
Originally a second-round pick of the Flyers (48th overall) in 2014, Aube-Kubel began last season in Philadelphia before moving on to Colorado. He won a Stanley Cup with his new team, finishing the year with 11 goals and 23 points in 74 games. He was in and out of the lineup during the postseason. The Avalanche were reported to be interested in re-signing NAK, but he ultimately agreed to a one-year, $1 million deal with Toronto. Aube-Kubel should again battle for bottom-six minutes with his new club, which isn't a fantasy-friendly proposition. Read Past Outlooks
read more
#

Calculate Stats Over Time
Just click on any two dates.
Scoring
FanDuel
DraftKings
Yahoo DFS
FantasyDraft
Head2Head
Loading Skater Game Log...
2022–23 Time On Ice Stats
Ice Time
Power Play
Short-Handed
2020–21
11:10
0:10
0:02
2021–22
9:49
0:02
0:02
2021–22
9:49
0:04
0:00
2022–23
9:05
0:04
0:20
2022–23
11:33
0:01
0:02
Capitals Depth Chart
Our full team depth charts are reserved for RotoWire subscribers.
Subscribe Now
Capitals Power Play Depth Chart
Our full team depth charts are reserved for RotoWire subscribers.
Subscribe Now
Recent RotoWire Articles Featuring Nicolas Aube-Kubel See More
FanDuel NHL: Sunday Targets
83 days ago
83 days ago
Michael Finewax tabs Jared McCann to exceed value versus the Jets.
NHL Playoff Pool Cheat Sheet
282 days ago
282 days ago
Forward, defensemen and goalie rankings for 2022 NHL Playoff Pools.
Frozen Fantasy: Time to Refocus
January 15, 2022
January 15, 2022
Janet Eagleson urges you to keep battling in your fantasy leagues.
Yahoo DFS Hockey: Friday Picks
January 14, 2022
January 14, 2022
Rickard Rakell of the Ducks makes Neil Parker's list of Yahoo recommendations for a three-game Friday slate.
FanDuel NHL: Friday Targets
January 14, 2022
January 14, 2022
Jason Chen likes the Wild's top trio to dominate a struggling road opponent.
Past Fantasy Outlooks
2021
2020
2014
Aube-Kubel took a step back in 2020-21, registering just 12 points and 120 hits in 50 games a year after posting 15 points in 36 contests. The 25-year-old forward hits like a wrecking ball, which is a double-edged sword in fantasy -- he'll likely be limited to bottom-six usage barring injuries to the Flyers' top six. The Alberta native probably won't do enough to bump Cam Atkinson off Philadelphia's second line, so Aube-Kubel shouldn't be expected to see much more than 13 minutes of ice time per game. As such, don't expect much more than 25 points, although he could supplement his fantasy value with 150 hits and 70 PIM as one of the Flyers' grittier players.
Aube-Kubel became a semi-regular for the Flyers in 2019-20, notching 15 points and 82 hits in 36 appearances. Impressively, three of his points came on the power play -- not bad for a forward who typically saw fourth-line usage at even strength. Aube-Kubel isn't expected to get much more than bottom-six assignments in 2020-21, either, which will limit his exposure to high-quality scoring chances. That said, the 24-year-old made the most of his chances last year and could challenge the 20-point mark in the abbreviated 56-game campaign. Nonetheless, fantasy managers should be cautious with NAK given the uncertainty surrounding his role heading into the year.
The Flyers second-round pick from the 2014 draft will be a welcome addition to the big club once his game matures. A sparkplug on the ice, Aube-Kubel's high-intensity game would be welcome on any third line in the NHL. He is only 18, though, and still needs to add bulk to be able to play his style of game successfully among the best in the world. It is expected that he will rejoin Val d'Or in the QMJHL to complete his third year in junior and will look to start his professional career next season.
More Fantasy News