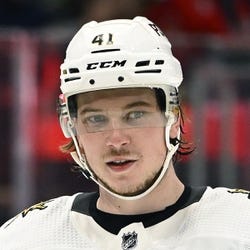 Calculate Stats Over Time
Just click on any two dates.
Scoring
FanDuel
DraftKings
Yahoo DFS
FantasyDraft
Head2Head
Loading Skater Game Log...
2021–22 Time On Ice Stats
Ice Time
Power Play
Short-Handed
2020–21
13:17
1:45
0:22
2021–22
11:30
1:40
0:01
Golden Knights Depth Chart
Our full team depth charts are reserved for RotoWire subscribers.
Subscribe Now
Golden Knights Power Play Depth Chart
Our full team depth charts are reserved for RotoWire subscribers.
Subscribe Now
Past Fantasy Outlooks
2021
2020
2019
2018
2017
Patrick's concussion history is well documented, but the truth of the matter is he hasn't played well when healthy, leading the Flyers to cut bait with the former No. 2 overall pick (2017) this past summer. He eventually ended up in Vegas (through Nashville) which would seem to be a mediocre landing spot. The Golden Knights have the depth to take it slow with Patrick in hopes he can rediscover his game, but it's difficult to envision Patrick rising up the depth chart for a legitimate Stanley Cup contender anytime soon. The good news for Patrick -- and thus, his dynasty league owners -- is that he will play this entire season at age 23 and time is still firmly on his side.
Patrick missed all of 2019-20 with a migraine disorder, but prior to that ailment, he had 61 points in 145 games in his first two seasons. Missing an entire year casts doubt on how effective Patrick will be when he returns to the lineup, but there's reason to be optimistic he'll produce when he's on the ice. Look for the 22-year-old to see a third-line role early on, as Sean Couturier and Kevin Hayes man the pivot on the Flyers' top-two lines. Patrick will likely end up between 15 and 20 points with modest hit totals, provided he doesn't suffer a setback with his migraines.
Patrick didn't necessarily have a poor season in 2018-19, posting 13 goals and 31 points in 72 games, but it was definitely a bit disappointing, as he was only able to make a one-assist improvement over the 13 goals and 30 points he posted as a rookie in 2017-18. As the No. 2 overall pick in 2017, owners understandably expected a lot more growth than that. For a two-month period from the middle of January to March, Patrick found his game, tallying eight goals and 19 points while registering a plus-6 rating in 25 contests, but outside of that run, he only notched five goals and 12 points in 47 games. The Flyers definitely aren't giving up on Patrick just yet, but with the addition of Kevin Hayes on a seven-year contract, the former No. 2 pick's role as Philadelphia's second-line center is in doubt for the upcoming campaign. While Patrick has established 13 goals and 30 points as his floor, owners probably shouldn't expect huge growth from him in 2019-20, either.
It took awhile for the 2017 No. 2 overall pick to get going, but he caught fire at the end of the season, posting eight goals and 16 points in his final 24 games. That turned out to be more than half of his regular-season point total, as the 19-year-old finished the campaign with 13 goals and 30 points in 73 games. During the final two months, his playing time at both even strength and on the power play increased according, and eight of his 30 points came with the man advantage. The Flyers have enough faith in Patrick that they plan to keep Claude Giroux at wing next to Sean Couturier on the top line. With the departure of Valtteri Filppula, Patrick will center the second line next to wingers such as Jakub Voracek, Travis Konecny, Wayne Simmonds or newly signed free agent James van Riemsdyk. With that kind of talent surrounding him, Patrick appears ready to take another step forward in 2018-19.
The Flyers lucked their way into the second overall pick in the draft and landed Patrick -- a huge get for a franchise that needed an infusion of forward talent. A native of Winnipeg, he's coming off an injury-shortened campaign for Brandon of the WHL in which he put up 46 points over 33 games, with sports hernia surgery and then a facial abscess causing him pain that’s lingered through the summer. Nonetheless, he’s expected to be ready for the start of the season, when it seems likely he'll serve as the third-line center behind Claude Giroux and Sean Couturier. Those are two great guys to learn the ropes from, and Patrick’s talent should win him some power-play time, but it’s wise for fantasy owners to moderate expectations for his first NHL campaign. Unless he finds his way into top-six minutes somehow, it'll be tough for him to crack 50 points.
More Fantasy News