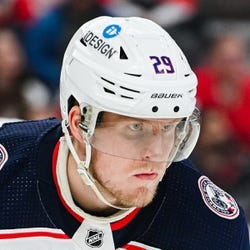 2022 Stats
G
14
A
17
PP Pts
8
+/-
-10
PIM
12
ROS Projections
G
A
PP Pts
+/-
PIM
Unlock Our Projections
2022 Fantasy Outlook
Laine was hit by the injury bug in his first full season with Columbus in 2021-22, but he was highly effective when he was healthy. He scored a whopping 26 goals and averaged exactly a point-per-game pace through 56 contests. Laine has never posted more than 70 points in a single season because his assist totals are typically low, but he managed 30 helpers last year in limited time. The Blue Jackets' surprise addition of Johnny Gaudreau in free agency should help the team's power play immensely, giving Laine -- who signed a four-year extension with Columbus in July -- legitimate early-round fantasy upside heading into the 2022-23 campaign. Read Past Outlooks
read more
#

Calculate Stats Over Time
Just click on any two dates.
Scoring
FanDuel
DraftKings
Yahoo DFS
FantasyDraft
Head2Head
Loading Skater Game Log...
2022–23 Time On Ice Stats
Ice Time
Power Play
Short-Handed
2020–21
17:28
2:08
0:01
2020–21
16:20
2:53
0:00
2021–22
18:50
3:25
0:01
2022–23
19:33
3:13
0:00
Blue Jackets Depth Chart
Our full team depth charts are reserved for RotoWire subscribers.
Subscribe Now
Blue Jackets Power Play Depth Chart
Our full team depth charts are reserved for RotoWire subscribers.
Subscribe Now
Recent RotoWire Articles Featuring Patrik Laine See More
FanDuel NHL: Saturday Targets
6 days ago
6 days ago
Chris Morgan is loading up on Habs as they visit a Sens side that just played Friday.
DraftKings NHL: Wednesday Breakdown
9 days ago
9 days ago
Igor Shesterkin makes Sasha Yodashkin’s list of DraftKings recommendations Wednesday, this time against the Leafs.
NHL Trade Targets: Powering Up Your Roster
9 days ago
9 days ago
Jason Chen gives the case for targeting players whose low shooting percentages should soon rise, including Buffalo's Owen Power.
DraftKings NHL: Thursday Breakdown
15 days ago
15 days ago
Sasha Yodashkin breaks down Thursday’s DraftKings offering, rolling with Canes netminder Freddy Andersen against Minnesota.
FanDuel NHL: Thursday Targets
15 days ago
15 days ago
Jason Chen recommends his picks for a busy 13-game Thursday slate.
Past Fantasy Outlooks
2021
2020
2019
2018
2017
2016
Laine wanted out of Winnipeg and got his wish shortly after the 2020-21 season started, being traded to Columbus in a deal for another disgruntled star, Pierre-Luc Dubois. Laine immediately clashed with new coach John Tortorella and managed just 10 goals in 45 games with the Jackets. For comparison's sake, Laine's lowest goal total over the course of any full season with the Jets was 28. He also potted at least 36 markers on two separate occasions. Tortorella is gone now, with long-time assistant Brad Larsen taking over in Columbus. Laine remains one of the NHL's truly elite snipers with a track record of prolonged success, and it's not as if his relationship with Larsen could be any worse than his with Torts. Laine will play nearly the entire season at age 23 and seems like a prime bounce-back candidate and value selection in all fantasy drafts this coming fall.
Just like the rest of the league, the shortened 2019-20 campaign affected Laine's point totals, as he failed to reach the 30-goal threshold for the first time in his four-year NHL career. Still, the world-class sniper still managed to garner 63 points, bouncing back from his disappointing 2018-19 campaign. For now, Jets fans should be planning to have the Finnish phenom on their Opening Night roster, though his name continues to swirl on trade winds and likely will continue to do so until the trade deadline. Even if he does get moved, Laine figures to pile up goals while being featured heavily on his team's No. 1 power-play unit, so the prospect of a trade should have little to no bearing on his fantasy value.
There are very few instances in which a 30-goal, 50-point season would be called a down year, but that was certainly the case for Laine. This is especially true considering the elite sniper went through both a 12-game and 15-game goal drought during the 2017-18 campaign. Expectations were high for the Finn after he racked up 44 goals in his sophomore season, but despite the slumps, he still managed to hit that 30-goal mark for a third straight year, with half of his goals coming on the power play. While Laine figures to anchor the second line for Opening Night versus the Rangers on Oct. 3, he could periodically be shifted into the top group to play alongside Mark Scheifele and Blake Wheeler throughout the season and will no doubt continue to be a top-end fantasy target.
The Finnish winger -- drafted second overall in 2016 behind Auston Matthews -- lit the lamp 44 times to rank No. 2 in the league last year, and he also dished 26 helpers while amassing a whopping 31 points on the power play. Possessing a wicked wrister that accounted for more than half of his 241 shots in 2017-18, Laine is special because the 20-year-old sniper exhibits keen awareness and positioning from the slot. He posted “only” five goals on 56 shots during the playoffs for a pedestrian 8.9 shooting percentage, though the hockey world should bear witness to a more patient Laine as the stocky skater gains more experience. He's the real deal.
If a concussion hadn’t sidelined Laine for eight games in January, the Finn would have had a great shot at beating out Toronto’s Auston Matthews for the rookie scoring title. Instead, the sniper came just five points shy, finishing with 36 goals and 28 helpers. Like many rookies before him, Laine did hit the skids for a bit -- just five points in March -- but he should be able to rebound as he adjusts to the grind of an 82-game season. Fantasy owners shouldn't be overly concerned that he’s likely be on the Jets’ second line behind Blake Wheeler; after all, he still averaged 17:54 of ice time in that role during the 2016-17 campaign. Generally considered a pure goal scorer -- a la Alexander Ovechkin -- the teenager figures to eclipse the 40-goal threshold this season.
Expectations are high for Laine after Winnipeg made him the No. 2 pick in the 2016 NHL Draft. He's guaranteed a role as a top-six forward and has the ability to change the game at a moment's notice. The 18-year-old phenom has a sniper’s mentality and could jump in as a scoring threat from Day 1. Second-line pivot Mark Scheifele may move to the top line at some point, but if Laine sticks on the second unit, he'll still enjoy playing with Bryan Little. Expect the Finnish youngster to step right into special-teams situations and fire the puck with his hammer of a right-handed shot that's drawn comparisons to Alex Ovechkin. But before that comp gets you all hyped up, remember that he's still very young and there will be a learning curve in the big leagues. Still, the potential is simply too great to ignore, making him a must-own player in keeper formats and a strong upside play in yearly leagues.
More Fantasy News