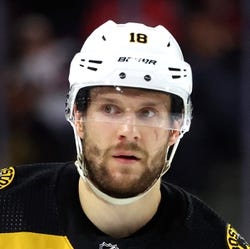 Calculate Stats Over Time
Just click on any two dates.
Scoring
FanDuel
DraftKings
Yahoo DFS
FantasyDraft
Head2Head
Loading Skater Game Log...
2021–22 Time On Ice Stats
Ice Time
Power Play
Short-Handed
2019–20
16:16
1:38
2:02
2020–21
17:09
2:40
1:20
2021–22
16:51
2:11
0:23
Bruins Depth Chart
Our full team depth charts are reserved for RotoWire subscribers.
Subscribe Now
Bruins Power Play Depth Chart
Our full team depth charts are reserved for RotoWire subscribers.
Subscribe Now
Past Fantasy Outlooks
2021
2020
2019
2018
2017
2016
You may not have heard, but the Devils had a bit of a disappointing 2020-21 season. In fact, Zacha was one of only a handful of guys that played well for the club. His 17 goals and 35 points were both career-best marks, and they came in just 50 games. Zacha chipped in 11 points with the man advantage for good measure. The bad news is that Zacha's production came with a minus-11 rating and a likely unsustainable 16.5 percent shooting percentage. New Jersey spent a fortune on Dougie Hamilton and others in an effort to become more competitive this coming year. That newly found depth may actually work against Zacha, who is best served as a secondary scoring option. Don't reach for him in your draft.
Zacha has thus far failed to live up to the hype of being selected sixth overall in 2015, though he needed just 65 games to rack up a career-high 32 points last season. Even with four full seasons under his belt, he'll only be turning 24 in April, so Zacha's best hockey is likely still ahead of him. His best chance at fantasy relevance in 2021 involves a move to wing. If Zacha stays at his natural center position, he'll be blocked from a top-six role by Jack Hughes and Nico Hischier, and the Devils lack the wing depth to put together two promising lines, let alone a third for Zacha.
Zacha has lost most of his luster after being selected sixth overall in the 2015 draft, having plateaued with either 24 or 25 points in each of his three full NHL campaigns. The 6-foot-3 Czech forward will likely be locked into a third-line role, but his reluctance to shoot the puck and limited physicality despite his large frame should make Zacha a fantasy afterthought. It's not too late for his career to find a second wind at age 22, but Zacha hasn't shown much to suggest that's going to happen.
Thus far, Zacha's failed to live up to the hype of being selected sixth overall in the 2015 draft. The 6-foot-3 Czech center posted just 25 points in 69 appearances last season after totaling 24 points in 70 games the previous year, though his rating did improve from a dreadful minus-17 to a passable minus-3. A 33-year-old Travis Zajac is the only thing standing between Zacha and a second-line center role, but Zacha failed to seize his chance in similar circumstances last season, so he's far from a lock to do so this time around.
Zacha has just 26 points through 71 NHL appearances, but the sixth overall pick in the 2015 draft still has time to hone his offensive game at just 20 years of age. The 6-foot-3, 210-pound pivot has already shown promise on the power play, notching five goals and 13 points with the extra man last season. Zacha’s fantasy stock will largely depend on his role heading into the season, but that could realistically range from first to fourth-line center for a Devils team with lots of depth but plenty of mystery at the position. Chances are he'll open on the third line behind first overall pick Nico Hischier and veteran Travis Zajac, though the team also signed Brian Boyle this offseason and Adam Henrique can slot in at either wing or center.
The sixth overall pick in the 2015 NHL draft is just 19 years old, but he didn’t disappoint in his first taste of NHL hockey, notching two assists in a late-season appearance with the Devils. Zacha will probably need a season of seasoning at the AHL level, but he does have an NHL-ready 6-foot-3, 210-pound frame and will make a push to land with the big club in camp. Even if successful, he’ll probably be limited to a bottom-six role at first, but the Czech centerman has the offensive skills to make a push for a top-six spot as soon as this year. This elite prospect should be on everyone’s radar if he’s still in New Jersey once the games start counting.
More Fantasy News