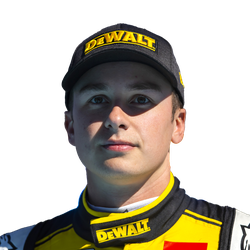 2022 Xfinity Stats
Points
0
Starts
1
Wins
0
Poles
0
Top 5
0
Top 10
1
2022 Cup Stats
Points
3016
Starts
30
Wins
1
Poles
3
Top 5
10
Top 10
17
2022 Fantasy Outlook
Bell made some great strides in season two. The young driver claimed his first-career Cup Series win (Daytona road course) and he posted 16 Top-10 finishes. His first appearance in the Chase for the Cup playoffs led to a respectable 12th-place finish in the final points. We'll get to soon see if Bell can step it up a notch in the upcoming season. We believe he can. The driver of the No. 20 Toyota is a prime candidate to breakout in 2022. Bell is capable of a multi-win season and breaking the 20 Top-10 plateau in his third full season of Cup Series competition. He'll remain paired with ace-crew chief Adam Stevens, and that is much of the reason for our optimism. Bell will come cheaper in fantasy drafts than the upper tier drivers, but he could produce upper tier driver returns in the upcoming season. Read Past Outlooks
read more
Car No. 20 Toyota
Crew Chief Adam Stevens
Rookie Year 2016
Birth Date 12/16/1994
Born Norman, Oklahoma, United States
Country UNITED STATES

NASCAR Cup
Read More News
Racing Stats
Loading Racing Stats...
Track Stats
Loading Track Stats...
Recent RotoWire Articles Featuring Christopher Bell
YellaWood 500 Preview: The Wild Card of the Chase
Yesterday
Yesterday
Mark Taylor previews this week's YellaWood 500, where Ryan Blaney looks like one of the favorites.
NASCAR Barometer: Reddick Conquers Treacherous Texas
3 days ago
3 days ago
Just one week after being bounced out of the playoffs, Tyler Reddick led 70 of the laps in the final segment and won for the third time this season.
NASCAR DFS: AutoTrader EchoPark Automotive 500
6 days ago
6 days ago
C.J. Radune offers a low-risk and a high-risk lineup for NASCAR AutoTrader EchoPark Automotive 500, with Martin Truex Jr. looking like an appealing risky pick.
NASCAR DFS Xfinity: Andy's Frozen Custard 300
6 days ago
6 days ago
C.J. Radune shares his lineup suggestions for the upcoming NASCAR Xfinity Andy's Frozen Custard 300, where Noah Gragson will look for his fourth straight victory.
Autotrader EchoPark Automotive 500 Preview: Round of 12 Begins
8 days ago
8 days ago
Mark Taylor previews the upcoming Autotrader EchoPark Automotive 500, where Kyle Larson will look to solidify his position in the Chase for the Cup.
Past Fantasy Outlooks
2021
2020
2019
2018
2017
2014
Bell makes the move from Leavine Family Racing to Joe Gibbs Racing in 2021. The talented youngster had a slow start to his rookie campaign last season, but he made big moves late in the year to tally seven Top-10 finishes and wind up 20th in the overall championship points. Bell will join a more capable team this season as he takes over Erik Jones' old ride at JGR. The No. 20 Toyota should help propel Bell to greater heights. Crew chief Adam Stevens moves from LFR to JGR with Bell to continue guiding the young driver. This continuity and chemistry remaining intact is a huge bonus for Bell and the No. 20 Toyota team. There is a sizable amount of potential and growth possible with this driver and team, and Bell is one to target in the mid-to-late rounds of fantasy drafts. There's just loads of potential that should be realized this season.
Perhaps the most gifted of this season's stellar rookie class is Bell. He steps into the No. 95 Toyota at Leavine Family Racing. Bell is a Joe Gibbs Racing development driver and is coming to the Cup Series via JGR's partnership agreement with LFR. This team is a "satellite" Gibbs team and enjoys the same equipment and technical support as the other JGR teams. Bell has spent the last two season's dominating the Xfinity Series. Although he has no championships, the 25-year-old prodigy has piled up a staggering 15 victories and 38 Top-5 finishes over his last two seasons competing in the Xfinity Series. Unfortunately, Bell's lack of performance in key playoff races has prevented him from winning those titles. Crew chief Jason Ratcliff makes the jump with Bell and they look to continue building this small race team at LFR.
The seven-win, 18 Top-5 finish campaign was quite impressive last season. While it fell short of the championship, thanks to a power outage at the season finale in Homestead, it was a remarkable accomplishment for the 24-year-old driver given that he was racing in his first, full Xfinity Series season. Bell returns for the 2019 campaign and will look to win the championship that eluded him last season. He was the most dominant regular driver in the series, so there's no reason to believe Bell can't win the crown. He will once again be paired with crew chief, Jason Ratcliff, and the very powerful No. 20 Joe Gibbs Racing team. All systems are go for another dominant season, and possible championship.
The reigning Camping World Truck Series champion will make his full-time shift into the Xfinity Series this season. Bell is fresh off a five-win, 21 Top 10 campaign in the trucks that was nearly flawless from start to finish in 2017. The 23-year-old Oklahoman squeezed in eight starts in this racing series last year, and opened some eyes in that part-time slate. Bell won his first-career Xfinity Series race at Kansas, and he nabbed five Top-10 finishes in that short schedule. The young driver will be paired with ace crew chief Jason Ratcliff in an effort to win both Rookie of the Year and the championship in the upcoming season. Bell's talent is undeniable. He's just another in a long line of very talented development drivers that JGR has cranked out the last several years.
With the departure of William Byron, Bell now becomes the focus of KBM's efforts in the truck series. Bell had a pretty good campaign last season with one victory and 17 Top-10 finishes. Not bad at all for his first full season of racing in the Camping World Truck Series. Bell will look to improve even more in the upcoming season. He'll be paired with Rudy Fugle at crew chief. He's the brilliant strategist that led Byron to a seven-win campaign at KBM last season. The combination of Fugle and Bell should pay immediate dividends. We expect to see Bell pick up the pace in victories, laps led and Top 10's. That could propel the young driver to his first championship in the coming season.
Young talent Bell takes over the No. 51 Toyota truck full-time that featured a multi-driver lineup last season. Bell was a part of that rotation logging six starts in the No. 51 truck. He posted a very noteworthy win in the popular dirt-track race at Eldora, and that put this rising star on the NASCAR map. He also added three Top-10 finishes in his seven start slate last season. Bell will team with crew chief Jerry Baxter in his first full season in the series. It will be interesting to see what this young, raw talent can do in a full 23-race slate. With the backing of Kyle Busch Motorsports and their fast trucks, the skies the limit for Bell in 2016.
More Fantasy News