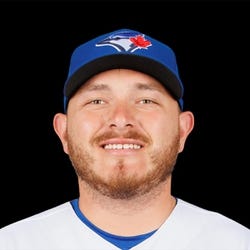 2022 Stats
AVG
.285
HR
14
RBI
63
R
59
SB
0
2023 Projections
AVG
HR
RBI
R
SB
Unlock Our Projections
2023 Fantasy Outlook
Kirk was one of the league's top hitting catchers as his 129 wRC+ was highest among the five backstops with at least 500 plate appearances. His plate skills remained excellent, with a 50% groundball rate supporting an increased BABIP. Kirk's exit velocity on fly balls increased, indicating his patience allowed turning on pitches he can drive, so while his power fell, it wasn't commensurate with the increase in grounders. Lost in Kirk's exploits at the plate were his improvements behind it. Kirk's defense improved significantly, specifically with regards to framing, but he also caught 26% of base stealers as opposed to 19% the prior campaign. Still just 24 years old, Kirk can easily regain some of the loft on batted balls, increasing power. Even with the uptick in defense, Kirk will often serve as designated hitter, so he should again combine quality and quantity into a top-10 fantasy backstop. Read Past Outlooks
read more
RANKSFrom Preseason
#

* Exit Velocity and Barrels/PA % are benchmarked against 2019 data (min 400 PA) and Hard Hit Rate is benchmarked against last season's data (min 400 PA). See here for more exit velocity/barrels stats plus an explanation of current limitations with that data set.
BB/K
1.09
BB Rate
11.6%
K Rate
10.7%
BABIP
.299
ISO
.130
AVG
.285
OBP
.372
SLG
.415
OPS
.786
wOBA
.350
Exit Velocity
90.5 mph
Hard Hit Rate
37.3%
Barrels/PA
5.2%
Expected BA
.278
Expected SLG
.431
Sprint Speed
20.7 ft/sec
Ground Ball %
50.0%
Line Drive %
19.2%
Fly Ball %
30.8%
Prospect Rankings History
View Complete Alejandro Kirk Prospect Ranking History
Advanced Batting Stats
Loading Advanced Batting Stats...
Additional Stats
Games By Position
Defensive Stats
Loading Games Played by Position...
Loading MLB Defensive Stats...
Batted Ball Stats
Loading Batted Ball Stats...
Stats Vs Upcoming Pitchers
Want more matchup stats?
View Alejandro Kirk vs. Pitcher Stats
Loading Matchup Stats...
Blue Jays Depth Chart
Our full team depth charts are reserved for RotoWire subscribers.
Subscribe Now
Recent RotoWire Articles Featuring Alejandro Kirk
2023 Fantasy Baseball Rankings - Way Too Early Top 300 Draft Ranks
44 days ago
44 days ago
James Anderson provides a way too early top 300 rankings for those who have the itch to start drafting for 2023.
Collette Calls: Hitting Bold Predictions Reviews
52 days ago
52 days ago
Jason Collette looks back at his bold predictions from last offseason, examining what went right and what went wrong.
DraftKings MLB: Saturday Breakdown
56 days ago
56 days ago
Dan Marcus provides his top options from all four games.
MLB Barometer: End-of-Season Risers and Fallers
57 days ago
57 days ago
For his end-of-year-wrap-up, Erik Halterman goes by round to list his risers to see how they performed vs. their earned auction value ranking, starting with Mookie Betts in Round 1.
MLB: Postseason Cheat Sheet and Strategy
58 days ago
58 days ago
Todd Zola tackles the MLB Postseason Cheat Sheet for RotoWire and discusses his approach to postseason leagues this year.
Past Fantasy Outlooks
2022
2021
Kirk is the type of player that is often overlooked as he is a bowling ball at 5-foot-8, 265 pounds. He's given the fantasy community reason to be excited about his bat, however, posting above-average slash lines in his two MLB seasons so far. His 2021 wasn't nearly as good as his short run in 2020 (165 wRC+), but Kirk still managed eight homers while striking out a mere 22 times in 189 plate appearances (11.6%). He missed multiple months with a left hip flexor strain, spent some time in the minors and didn't end on a particularly strong note, batting .200 over the final month of the season. Meanwhile, Danny Jansen exploded for a .310/.365/.707 line over the final month, creating some questions about Kirk's role behind the dish to begin 2022. Kirk's framing didn't grade out well last year and the Blue Jays have another exciting catcher in the pipeline in Gabriel Moreno, but Kirk already showed at ages 21 and 22 that he can easily clear the low offensive bar at the position.
Whoever is reading this might look more like a pro athlete than Kirk does, but he's the one who jumped over Double-A and Triple-A and hit .375 in his first 25 MLB plate appearances as a 21-year-old. The 5-foot-9, 220-pound backstop's innate bat-to-ball ability is what allowed him to ascend so rapidly through the minors. Toronto might also be viewing this as his athletic prime, as he really can't afford to lose what little agility he still possesses. There are obviously questions about his defense behind the dish, but so far he has proved adequate enough to at least work in a timeshare. Additionally, Kirk has enough power to bang out double-digit home runs in a full season. He will be competing with Danny Jansen and Reese McGuire this spring. Toronto could send him to Triple-A for a bit more seasoning, but he's a solid bet to be a good fantasy catcher if and when he plays.
More Fantasy News